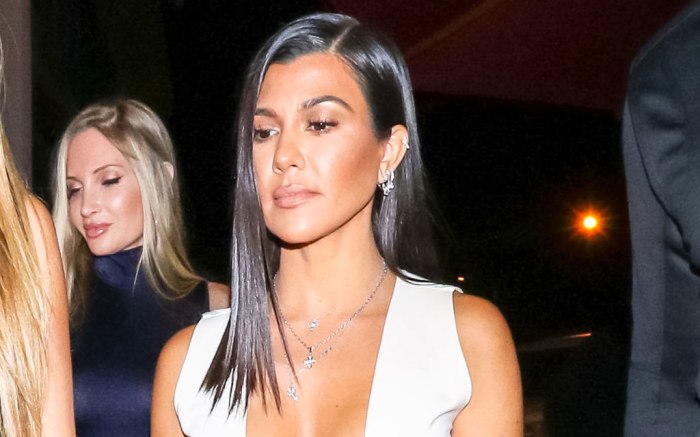 Kourtney Kardashian made a statement in a cleavage-baring look as she stepped out to John Legend’s 40th birthday bash in Los Angeles on Saturday night.

The 39-year-old wore a black bralet with a halter-style neckline, which she paired with black pants for a DIY jumpsuit. She wore a blazer draped over one shoulder for a menswear-inspired evening look.

For footwear, she selected pointy-toed black pumps. The pumps had a stiletto heel and appeared to be made of patent leather.

The “Keeping Up With the Kardashians” star wore her dark locks in a ponytail and went with a neutral makeup look.

Legend’s birthday celebration brought together a slew of the “Ordinary People” singer’s friends and family. The Oscar winner’s wife, Chrissy Teigen, took to Twitter prior to the bash to show off two different tuxedos she was considering outfitting son Miles in. She had fans vote on whether Miles should wear a black or white tuxedo jacket for the affair.

Teigen took to Instagram Stories to show off her own outfit: a glitzy gold dress with a strapless neckline.

Kardashian was not the only member of her famous family to snag an invite to Legend’s party. Younger sister Kim Kardashian appeared alongside husband Kanye West, although the duo managed to evade paparazzi.