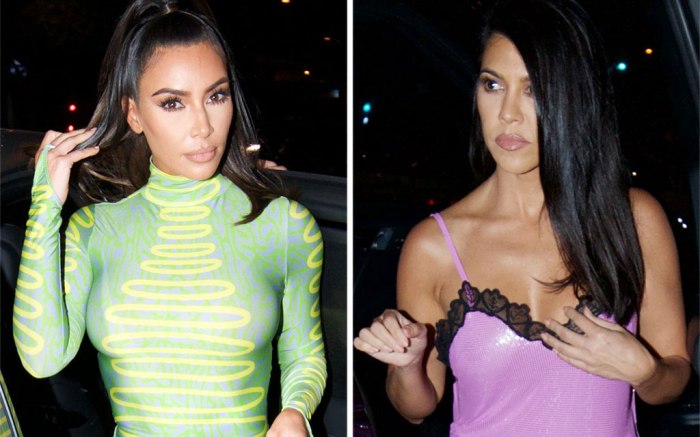 Neon was all over the spring ’19 runways in September — and now the color has found its way into the wardrobes of the Kardashians.

At Larsa Pippen’s birthday party Saturday night in Los Angeles, Kim and Kourtney Kardashian were spotted in the season’s must-try trend, with each sister offering up her own spin on the fluorescent style.

Kim opted for a lime-green bodycon dress, featuring a high neck and long sleeves that hooked around her middle fingers for a sultry effect. The piece was also adorned with squiggly yellow lines that matched perfectly with her bright ankle-strap sandals.

Kourtney, on the other hand, chose a vintage Versace lingerie dress — its lace trimming at the décolletage and lower hemline contrasting with a shimmery purple base.

Like Kim, Kourtney also went for strappy sandals. Her flossy black heels were tamed with a similarly simple pedicure.

Spotted on runways including Prabal Gurung, Jeremy Scott and Virgil Abloh’s Off-White, neon is having a major fashion moment. Celebrities including the Kardashians’ half-sister Kendall Jenner, as well as models Ashley Graham and Bella Hadid, have already stepped out in their own interpretations of the trend.

Click through the gallery to see more of Kim Kardashian’s body-confident styles.

Go behind the scenes at FN’s cover shoot with Bella Hadid.