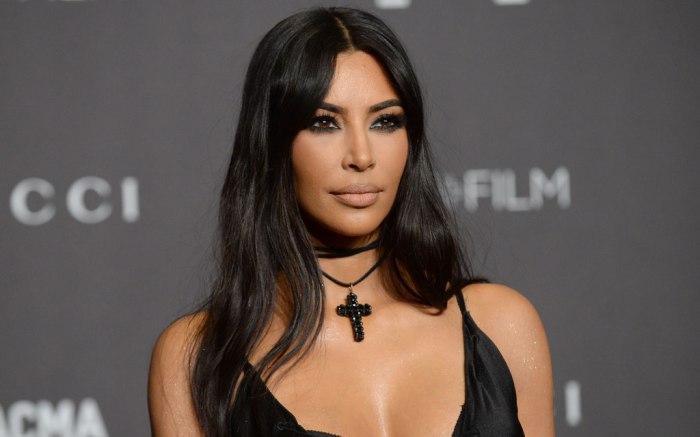 The reality star took to Instagram today to show off a sensual heart-themed photo shoot centered around the upcoming holiday.

In the gallery, which is meant to promote an upcoming KKW Fragrance release, the makeup mogul sports three skin-baring looks as she poses alongside hearts with her various perfume names on them.

The first image shows the 38-year-old clad in a nude bra and underwear set as she bends down in front of a heart reading “Baddie.” Kardashian wears a long blond wig in the shot, and she has edgy see-through mules on her feet.

In a subsequent shot, the mother of three leans against a baby-blue heart while sporting a long-sleeved beige-gray bodysuit. She pairs the it with sensual sandals that feature straps going up almost to her knees.

The last image is of Kardashian against a yellow background as she sits on a heart emblazoned with the word “Wifey.” In this picture, she wears a cream-colored bralette with blush underwear. The “Keeping Up With the Kardashians” star completes her look with another pair of strappy sandals.

Kardashian’s Valentine’s Day shoot comes after sister Kylie Jenner posted similar pictures on Jan. 23 promoting an upcoming Kylie Cosmetics collection. In Jenner’s images, she wears a red bodysuit with sparkling Christian Louboutin pumps as she poses on top of glittery red letters spelling out her first name. She completes her look with a red wig.

Click through the gallery to see Kim Kardashian’s most body-confident looks over the years.