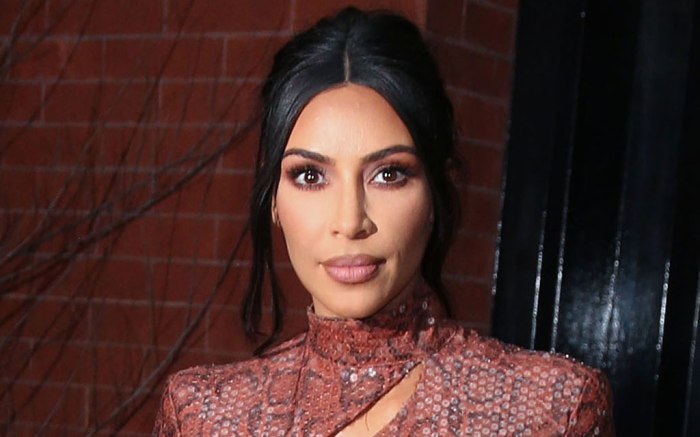 Leave it to Kim Kardashian to make a vintage look feel very of-the-moment.

The 38-year-old stepped out to tape an episode of “The Tonight Show Starring Jimmy Fallon” in New York last night clad in a Thierry Mugler dress from 1983.

The curve-hugging dress was covered in sequins from head to toe and featured snakeskin fabric. It had a slash at the neckline and long sleeves.

When it came to her shoes, Kardashian reached for a familiar brand: Yeezy. She was clad in season 5 “Mink” ankle boots from the street-style label, which is creative-directed by her husband, Kanye West. The booties featured a pointed toe and a thin stiletto heel.

The reality star wore her hair in a glamorous updo.

On “Fallon,” the KKW Beauty mogul and talk show host freaked out while touching mystery objects hidden inside a box. Items included mashed potatoes and gravy, and a fake squirrel.

After the show, Kardashian linked up with older sister Kourtney Kardashian for dinner in New York.

Kourtney was chic in a sheer top with her bra visible underneath. She wore flared pants and a matching trench coat with the shirt.

Click through the gallery to see Kim Kardashian’s most body-confident looks through the years.