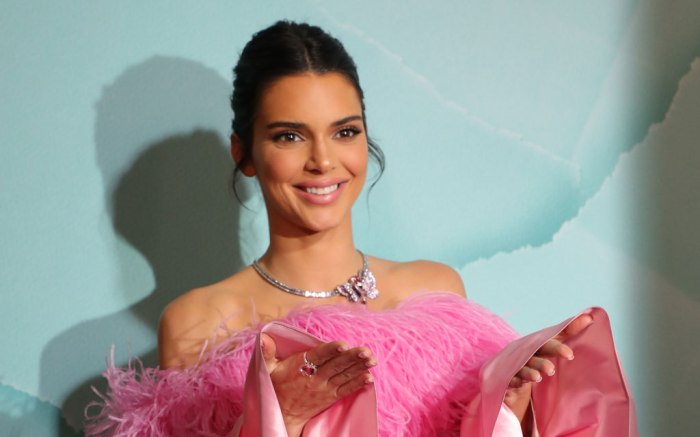 The 23-year-old stepped out at the opening of Tiffany & Co.’s new Sydney flagship wearing a leggy pink minidress with white-hot heels.

The satinlike dress featured feather trimming at the neckline and billowing ruffled sleeves. She paired it with Balenciaga’s square knife pumps that boast an ultrapointy toe and stiletto heel in a white leather finish.

The supermodel completed her ensemble with Tiffany jewelry, pulling back her brunette locks in a sleek updo to reveal a natural makeup look.

Flying into Sydney, the “Keeping Up With the Kardashians” star sported a very different outfit. She was photographed leaving the airport in a white quarter-zip sweater and black sweatpants. For footwear, Jenner went with brother-in-law Kanye West’s Yeezy Wave Runner 700 shoes.

Jenner is a Tiffany partner and a regular attendee of the jewelry giant’s events. The megainfluencer, who has more than 107 million followers on Instagram, is one of the most sought-after models in the industry, walking the runway for big brands like Chanel, Burberry and Versace.

She also starred in the spring ’19 Stuart Weitzman campaign alongside Willow Smith, Yang Mi and Jean Campbell. Jenner is an Adidas Classics ambassador, having worked for the Three Stripes since 2017.