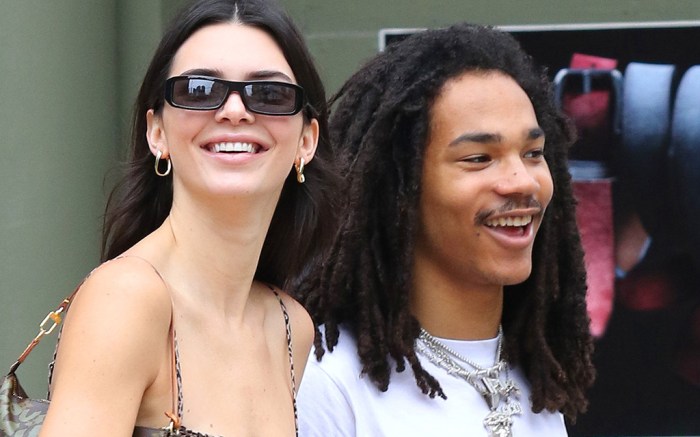 Kendall Jenner looked summer-ready as she strutted around New York City in an airy sundress and Stuart Weitzman boots.

The supermodel rocked the Rouen cheetah print dress from Reformation, which featured spaghetti straps, a straight-top bodice and a ruffle finish along the hemline.

The 23-year-old styled the dress with the Stuart Weitzman stretch black nappa Milla knee-high boots to nail a city-chic look.  The star accessorized the outfit with a sleek gold bracelet and matching gold earrings along with rectangular sunglasses, making for the perfect summer vibe.

Jenner was seen with actor and influencer Luka Sabbat, who has done campaigns for Ugg and other labels.

Sabbat was sporting a casual look in black sweatpants with a white word graphic teamed with a white T-shirt. The “Grown-ish” star matched the look with a pair of black sneakers.

The pair spent the day shopping in SoHo. Sabbat tried on different jackets to show Jenner.  They also stepped into the luxury vintage store What Goes Around Comes Around.

Jenner was all smiles as she stopped to take selfies with fans.

Like many other boldface names, Jenner is a fan of Stuart Weitzman’s footwear. In January, she debuted as one of the faces of the brand’s spring ’19 #SWWomen campaign, which is meant to celebrate independent women and their authenticity, alongside Jean Campbell, Willow Smith and Chinese singer Yang Mi, whose first post for the brand garnered 48 million views and 700,000 likes.

Stuart Weitzman’s parent company Tapestry Inc., with Coach and Kate Spade also under its umbrella, announced a plan at the beginning of the year to expand on opportunities in Asia. In January, seven new Stuart Weitzman locations opened in mainland China.