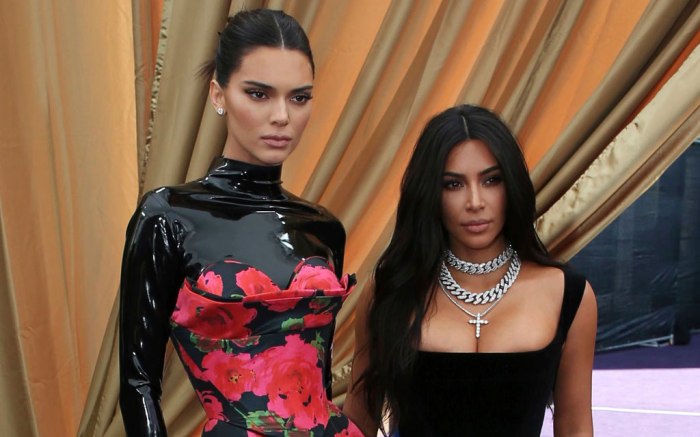 Kendall Jenner and Kim Kardashian may be sisters — but they each have their own style sensibilities.

The “Keeping Up With the Kardashians” stars wore completely different looks Sunday night on the red carpet at the 2019 Primetime Emmy Awards at Los Angeles’ Microsoft Theater. Jenner opted for a more daring, directional look, while Kardashian sported a simple, classic dress.

Jenner wore a floral Richard Quinn dress with a high neck, shiny black long sleeves and a trumpet skirt. After sporting blonde locks at London Fashion Week, the supermodel is back to her natural brunette.

The outfit wasn’t that different to what the Skims shapewear designer wore to the Creative Arts Emmy Awards last weekend. There, Kardashian stunned in a black Versace gown with strappy sandals.

While the sisters were not nominated for an award, they played an important role at the Emmys as presenters. The Kardashian-Jenner women join a star-studded list of presenters that also includes Zendaya, Viola Davis and the “Game of Thrones” cast. At this year’s awards — for only the fourth time in Emmy history — there was no host. Instead, departing shows were honored, among them “Game of Thrones,” which had a whopping 32 nominations, the most of any show ever. The acclaimed series took home two awards, one for best drama (its fourth win in this category) and for best supporting actor (Peter Dinklage).

Click through the gallery to see more photos of celebrities on the red carpet at the 2019 Primetime Emmy Awards.