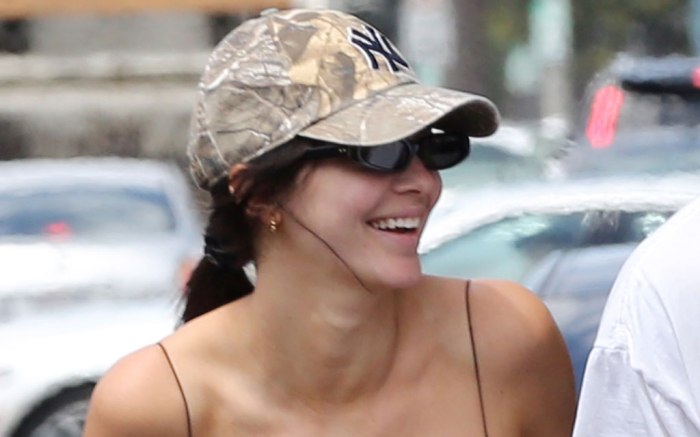 Kendall Jenner is one of the biggest supermodels in the world, but when it comes to style, the 23-year-old likes to keep things casual.

She was spotted out and about in Beverly Hills, Calif., yesterday, clad in a skimpy black tank top and matching leggings.

For footwear, the “Keeping Up With the Kardashians” star opted for Adidas Yeezy Boost 700 “Geode” sneakers. Adhering to the popular dad shoe trend, the Yeezy Boost 700 features a mesh and suede upper with a chunky molded outsole. The colorway Jenner selected comes in a combination of dark grays and earthy browns; the shoe retails for $300.

The “it” girl pulled her look together with a camouflage New York Yankees baseball cap and a pair of teensy, oval-shaped sunglasses.

As the highest-paid model in the world, Jenner has a number of lucrative brand partnerships in the fashion space, including deals with Longchamp, Tiffany & Co. and Calvin Klein.

The star’s choice of Adidas Yeezy footwear is a fitting one, as she has been an Adidas Classics ambassador since 2017 and often models the brand’s wares in advertisements and on social media. Adidas partnerships run in the Kardashian-Jenner family. Jenner’s brother-in-law, Kanye West, is the Yeezy creative director; her little sister, Kylie, is also an Adidas ambassador.

Click through the gallery to check out more of Kendall Jenner’s style.

Watch below to see Hailey Baldwin discuss her street style.