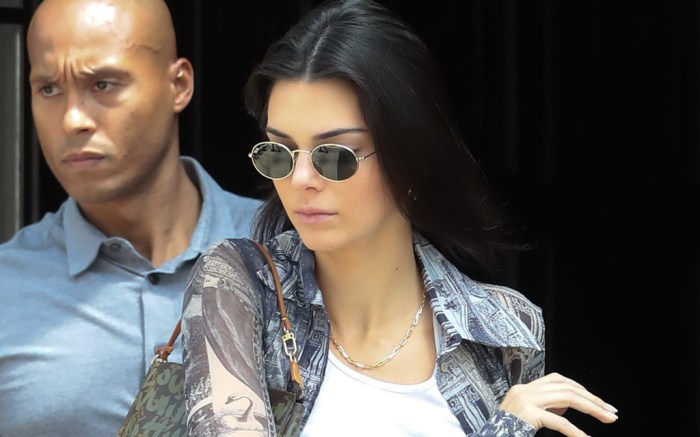 Kendall Jenner’s known for her pulled-together street style, but this might be one of her most daring looks yet.

The 23-year-old was spotted exiting her hotel in New York yesterday clad in a crop top and edgy leather pants — with summery gladiator sandals capping off her ensemble.

Jenner sported a white crop top under a printed button-down top from Acne Studios. Her edgy straight-leg leather pants — which featured a high rise, belt loops and side/rear pockets — sell for $1,981 and come courtesy of Mugler.

For shoes, the “Keeping Up With the Kardashians” star went with Rag & Bone’s strappy Cindy Tie black gladiator-style sandals. The shoes have a ’90s-inspired square silhouette, with a low mid-heel.

The supermodel pulled together her look with rounded sunglasses from Ray-Ban and a Louis Vuitton graffiti-print purse.

When it comes to her off-duty style, Jenner can often be found in casual, easily walkable footwear like sneakers, work boots and oxfords. The brunette particularly loves Adidas kicks — unsurprising given that she’s an Adidas ambassador. The brand’s Yeezy line, which boasts Jenner’s brother-in-law Kanye West as creative director, is a favorite of hers.

As one of the most sought-after models, the reality star is in high demand in the fashion industry. She starred in Stuart Weitzman’s spring ’19 campaign, showing off her flexibility in lunge poses.

Click through the gallery to see more of Kendall Jenner’s celebrity style.

Watch the video below to see Hailey Baldwin discussing her street style.

What is Kendall Jenner’s Shoe Size? The Answer Might Surprise You