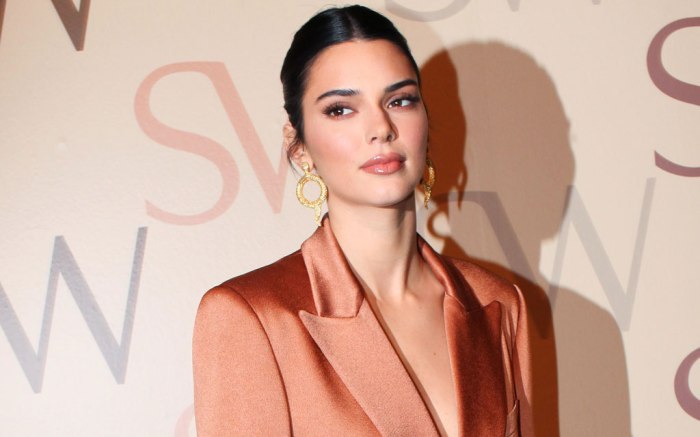 Only Kendall Jenner would choose this look for a Valentine’s night out.

The 23-year-old stepped out to Madison Square Garden on Feb. 13, where she rooted for boyfriend Ben Simmons’ Philadelphia 76ers as they took on the New York Knicks.

Jenner went for a low-key look, stepping out in a graphic T-shirt, mom jeans and a long black leather coat with “Matrix” vibes.

The Adidas ambassador selected open-toe shoes by Milin — an interesting choice given the sub-40-degree New York weather. The statement sandals featured a brick-orange fluffy upper and a soaring block heel.

But the most interesting aspect of the model’s look was a shiny black bucket hat, which she wore down low, obscuring part of her face.

After the game, Simmons, who has a shoe deal with Nike, joined his girlfriend for a Valentine’s Day date. The 2018 Rookie of the Year kept things casual in a crewneck sweatshirt and distressed jeans. He wore dark sneakers by the Swoosh and added some chains to his look for a metallic pop.

While Jenner’s fluffy sandals made quite the statement, she swapped them for a comfy pair of white sneakers later in the night. The “Keeping Up With the Kardashians” star also ditched the bucket hat — proof that it was a sartorial choice and not because of a bad-hair day.

Click through the gallery to see more of Kendall Jenner’s best street-style looks.

Kendall Jenner Makes One of Her First NYFW Appearances for Longchamp