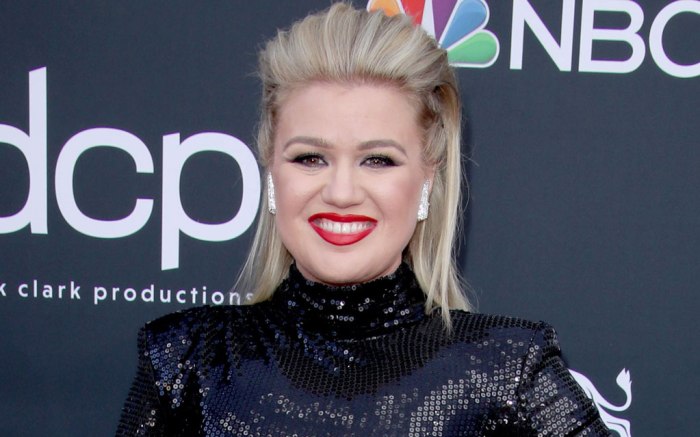 Kelly Clarkson’s red carpet look at tonight’s Billboard Music Awards is all about the shoes.

The “Behind These Hazel Eyes” singer stepped out on the red carpet in Las Vegas clad in strappy crystal-covered rainbow sandals from Christian Louboutin that added a colorful pop to her black ensemble. The sandals featured six straps — each covered in a different color of gemstones.

The bold shoes contrasted with the “American Idol” alum’s dress — a sequins-covered, long-sleeved black dress with a sensual thigh-high slit.

Clarkson wore her blond locks down and teased up high. She pulled together her look with diamond jewelry, including statement earrings and a cocktail ring.

The songstress is the host of this year’s show, returning for a second consecutive time, and she’s bound to come out in several other outfits throughout the night.

Clarkson is also on the list of performers. Other stars slated to sing tonight include Taylor Swift (performing new hit “Me!” with Brendon Urie), BTS and Halsey.

As far as nominations go, Cardi B leads the field with a whopping 21 nods. Drake and Post Malone tie just behind her for second place with 17 nominations each.

Click through the gallery for more celebrity arrivals on the red carpet at the 2019 BBMAs.

Watch the video below to see celebrities attending the 2018 FNAAs.