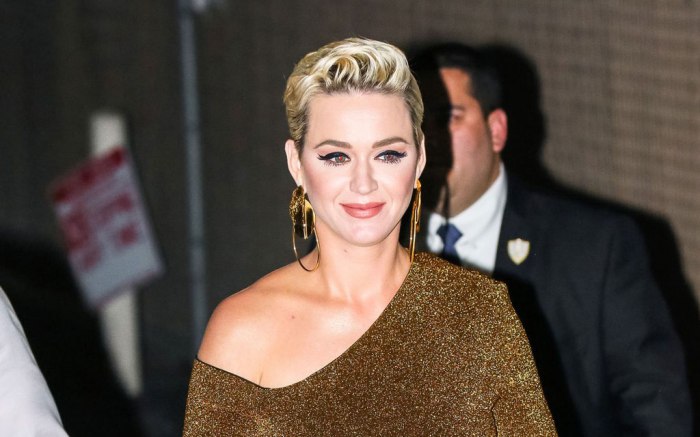 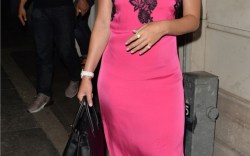 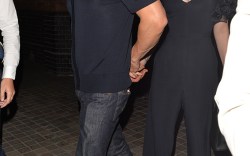 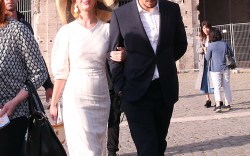 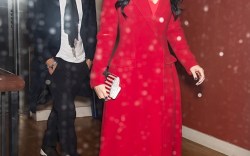 Katy Perry shimmered in a gold look as she stepped out to “Jimmy Kimmel Live!” in Los Angeles yesterday to promote the latest season of “American Idol.”

The “Teenage Dream” singer sported a curve-hugging gold dress by Solace London that featured an asymmetrical neckline and sparkly detailing throughout.

Though Perry has an eponymous shoe label, she chose a pair of heels from a different brand: Giuseppe Zanotti. The 34-year-old picked Zanotti’s Harmony sandals, a popular red carpet style that features three straps and a 4.7-inch heel. Her footwear came in mirrored gold patent leather and retail for $845.

She accessorized with geometric gold earrings and a statement ring.

Speaking with Jimmy Kimmel on his talk show, Perry discussed her engagement with “Pirates of the Caribbean” star Orlando Bloom, who proposed to her on a helicopter on Valentine’s Day while drinking champagne.

She also revealed that she threw away Bloom’s 10-year-old toiletry bag while he was out on vacation.

“He was very upset; I had a full timeout,” she revealed.

The “Swish Swish” hitmaker also joked that she only agreed to an interview because “[Kimmel] lives so close to In ‘N Out and [she’s] so hungover.”

The shoe designer revealed that she indeed did get a burger from the fast-food chain in a post-show Instagram video of herself chowing down in the car.

Three different mewdz, which one are you?! 😛 Tune into @JimmyKimmel TONIGHT at the 11:35p/10:35p CT for the lols (and major Idol talk) @americanidol ❤️

Click through the gallery to see Katy Perry and Orlando Bloom’s couple’s style.