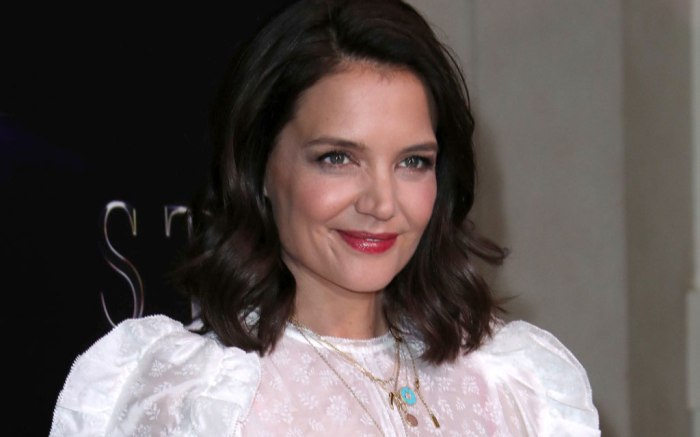 Katie Holmes gave her seal of approval to the peekaboo bra trend today.

The 40-year-old actress stepped out in Las Vegas for CinemaCon wearing a see-through blouse that revealed a brightly colored bra underneath. The sheer shirt was white and featured puff sleeves with ruffle detailing. Holmes teamed it with a floral-patterned skirt that belted at the waist.

For footwear, the “Dawson’s Creek” alum went with white, black and blue striped sandals. The shoes had low-cut sides, flattering the feet, and blue tassel detailing at the ankle. The A-lister’s baby blue pedicure was on full display in the summery sandals.

Holmes was joined at the event by Diane Keaton, who looked chic in a black turtleneck, a flowing skirt and a long white coat. The 73-year-old Academy Award winner completed her eccentric ensemble with white lace-up booties on a chunky block heel.

Elsewhere, Henry Golding surprised in a head-to-toe baby blue ensemble. The “Crazy Rich Asians” star wore a form-fitting suit with a collared shirt underneath, going tieless for a slightly more casual vibe. His shoes were light blue loafers, an unexpected yet fashionable choice for the red carpet.

As for Holmes’ look, the “Logan Lucky” star likes to mix things up, often hitting the streets in casual footwear from brands like Adidas and Ugg. On the red carpet, she tends to favor high-end wares, having built up relationships with designers like Zac Posen.

Learn how to walk in heels from drag queen Carrie Dragshaw below.