Why Are We So Obsessed With Katie Holmes? 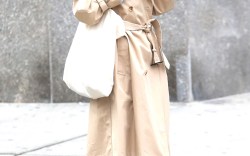 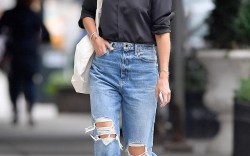 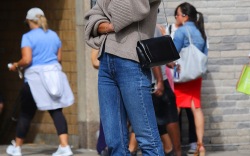 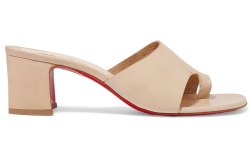 Katie Holmes seems to be everywhere these days. Red carpet snaps, gala events, paparazzi shots and street-style opps have bombarded fashion sites, which have heralded her style comeback — often through the post-break-up lens (she split with actor Jamie Foxx earlier this summer, shortly after they attended the Met Gala together in May).

But there is something more to the current Katie Holmes clickbait than just a breakup and cashmere revenge bra. The actress’ recent style campaign is just one chapter in a fashion narrative that has played out alongside her acting career since almost the beginning. It’s helped Holmes to become America’s sweetheart, in fashion and beyond; a celeb who has achieved that rare spot wedged between red carpet and tabloid fodder, a public figure with a high gossip value who is simultaneously idolized for her glamor and idealized as the girl-next-door — now grown up to be the woman-just-like-us.

It’s often said that Americans view Hollywood as their royal court, since we don’t have an actual king, queen and so on (though we certainly still pay attention to what’s happening across the pond). If Holmes was part of the Windsors, she would most certainly assume the role of her British Kate counterpart. Both Holmes and Middleton are wholesome, perfectly brunette, always appropriately dressed in sensible outfits, tall enough to pull off looks that would make others look less-than-regal. Both also seem to prefer a controlled release to the press, in meticulously planned outings.

Middleton married a quiet prince. Holmes should have done the same, but hers was more prone to jumping on couches, performing his own “Mission: Impossible” stunts and, at the time of their courtship, gushing to every press outlet about his budding relationship with the starlet. It was within this context of a head-scratching mismatch that the American public brought its gaze to Holmes and with it, to her fashion choices.

“Dawson’s Creek” was wildly popular among the middle school and high school set when it debuted in 1998. That’s a demographic that now comprises the older millennials who have effectively grown up alongside the actress, who played tomboy Joey Potter on the show (and will turn 41 years old in December). With her bootcut jeans and shiny hair, the then-20-year-old was cast as the girl-next-door by every magazine that profiled her and was often seen with boyfriend Chris Klein on her arm (himself an emblem of late ’90s teen culture, having starred in “American Pie” in 1999). The pair embodied Midwestern American wholesomeness — until they broke up in March 2005. Just a month after, Holmes was confirmed to be dating megastar Cruise, the actor that she admitted to having a childhood crush on in a Seventeen magazine interview from 2004.

In May 2005, Holmes’ new boyfriend jumped onto Oprah’s couch to declare his love for her. The next month, “Batman Begins” premiered and the actress took her leap to the silver screen. And her wardrobe advanced accordingly:  Gone were the bootcut jeans and college-era going-out tops. In their place were sleek LBDs, slick hair and neutral palettes interrupted only by a propensity for a lipstick-red gown when the occasion called for it. At the June 6 premiere of “Batman Begins,” Holmes wore a charcoal-gray silk cocktail dress with an of-the-moment handkerchief hemline. Her hair was casually swept up and she wore her own delicate pendant around her neck. It was a moment of metamorphosis, distilled down to sartorial choices: no longer the girl-next door, not yet the wife of Hollywood’s biggest star.

As Mrs. Cruise, Holmes jumped to the A-list, which could also be called the Armani-list. The Italian designer outfitted the actress in a lace gown for the duo’s Italian nuptials, which were so high profile that security had to set barricades outside the castle venue, where hundreds of fans looked on. The actress continued to wear Armani throughout her marriage to Cruise, at events like the Met Gala and a Vanity Fair Oscars Party. Her every look was applauded and scrutinized in the same manner of the Duchess of Cambridge. When Holmes cut her hair in 2007, it was treated as explosive news.

In 2009, Holmes launched her own fashion line with her stylist, Jeanne Yang. For as many eyeballs that were on Holmes at the time, the collaborative Holmes & Yang brand flew mostly under the radar and eventually folded after critics continued to announce that the celebrity line did not live up to the yardsticks of what Victoria Beckham and Mary-Kate and Ashley Olsen had created. The line of commercial-friendly tailored dresses and separates did, however, seem to gel Holmes’ brand with a more approachable fashion outlook (and put Armani at an arm’s length).

For the past decade, Holmes’ personal style has been closely linked to that of her daughter. Raising Suri (who is now 13) in New York City over the past decade transformed the actress and her offspring into the foremost example of mommy-and-me style the country had since Laura Ashley sold its floral frocks in matching sets. As celebrity style became even more essential to fashion brands, so too did Holmes’ relatable looks as a mom. Press alerts touted Suri’s Ugg boots and mini Roger Vivier ballet flats more frequently than they did her mother’s fashion choices.

It’s only recently that Holmes has been spotted outside the mommy lens, and that cashmere bra may have been just the thing. Earlier this year, the actress began working with Julia von Boehm, the celebrity stylist also responsible for Nicole Kidman’s impeccable red carpet looks. The cashmere cardigan bra and matching cardigan by emerging New York label Khaite is in good company with the brand’s checked overcoat and tailored trousers, as is a navy suit by Gabriela Hearst, plus plenty of tailored blazers by the likes of Mango and Equipment.NYC. On foot, Holmes has worn quirky flat sandals like Gianvito Rossi’s high-heeled thongs and Christian Louboutin’s big-toed slides with equal aplomb as she has her classic Jimmy Choo pumps on the red carpet.

The “Katie Holmes effect” may not have the same ring as it does with the Middleton theory. But a placement on America’s mom-next-door still looks to be sweetheart deal for any brand she wears.

From Mom Mules to Uggs: The Shoes Katie Holmes Loves

Katie Holmes’ Latest Look Is All About Her Mom Mules