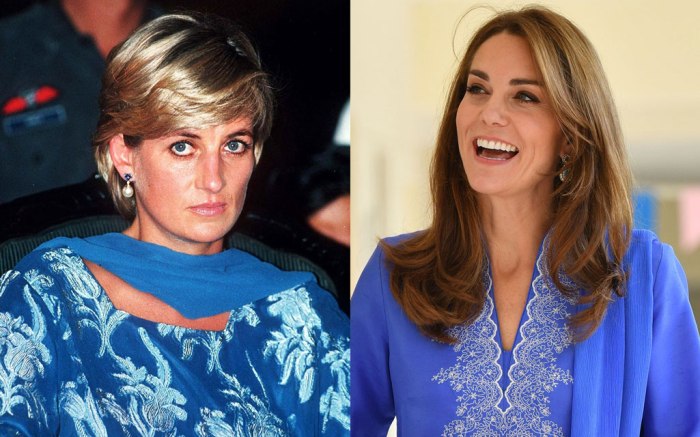 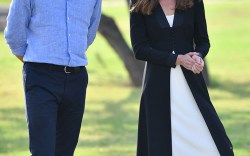 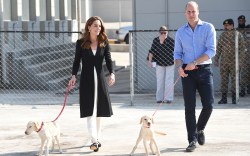 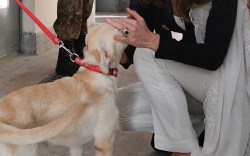 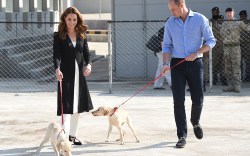 Kate Middleton and Prince William are on a royal tour of Pakistan, and the Duchess of Cambridge is taking styling cues from Princess Diana.

Two of the three outfits Middleton has worn so far on her trip appear to have pulled styling inspiration from her mother-in-law.

As she stepped off the plane yesterday, the mother of three sported a light blue ombré Catherine Walker outfit with Rupert Sanderson’s Malory pumps, one of her go-to styles. The look, which consisted of a dress and pants, was designed to resemble a “shalwar kameez,” a traditional Punjabi combination dress of trousers (“shalwar”) and a tunic (“kameez”).

Royal watchers couldn’t help but notice the similarities between Middleton’s outfit and an ensemble worn by Princess Di on a February 1996 trip to Pakistan. For her tour, Diana wore a pale blue tunic top and slim pants — although she went with ballet flats rather than heels.

It seems that Middleton is looking to Princess Diana’s Pakistan style for inspiration throughout her royal tour. The duchess today wore a Maheen Khan kurta  (a loose-fitting collarless shirt), pants and scarf for a visit to an Islamabad school. She completed her look with pointed-toe, block-heel New Look pumps that cost just $38.

Middleton’s outfit was akin to a look Princess Diana wore in May 1997 for a royal tour. Lady Di wore the same three-piece blue combo, although her kurta had a floral print. Like Middleton, she selected pumps — but hers had a more ’90s vibe courtesy of thin crisscross straps and a kitten heel.

Click through the gallery to see all of Kate Middleton’s style on her royal tour of Pakistan.