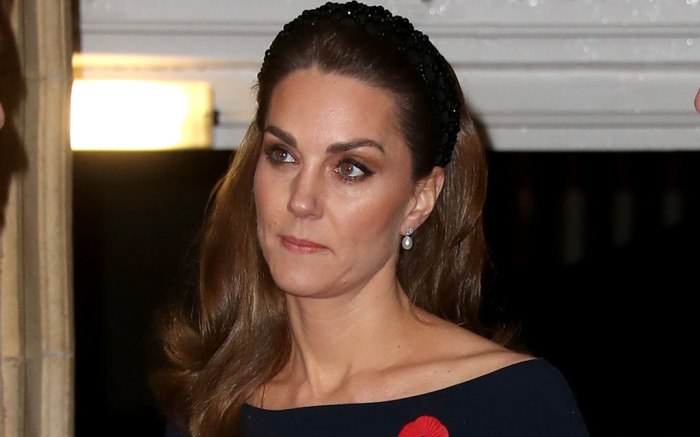 Kate Middleton went for an appropriately somber look as she and the rest of the British royals honored fallen soldiers today at the Festival of Remembrance in Kensington, London.

For shoes, the Duchess of Cambridge selected the same pumps she wore to last year’s Festival of Remembrance: Jimmy Choo’s Romy heels. The court shoes featured a pointed toe, a black velvet upper and a slim stiletto heel. While not available for purchase in the fabrication chosen by the duchess, the Romy can be shopped in suede at Farfetch.com for just under $600.

To complete the look, the mother of three selected an Alexander McQueen clutch and a sparkly Zara headband. Puffy headbands are a major fall trend, and the Zara one is a relatively accessibly priced take on the fad — available on the brand’s site for just $30.

Held annually, the Festival of Remembrance is one of several events the British royal family attends to coincide with Remembrance Day, a U.K. memorial day honoring fallen soldiers. This year’s festival included performances from well-known entertainers such as Leona Lewis and James Blunt.

Click through the gallery to see how Kate Middleton’s style evolved over the years.