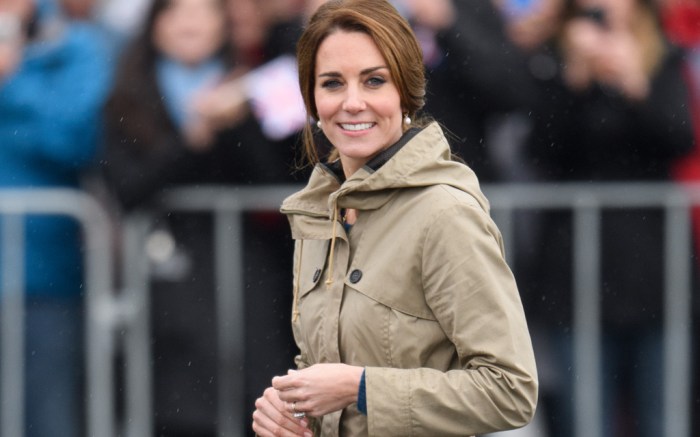 She might be the Duchess of Cambridge, but time and again Kate Middleton reminds us that she knows how to keep things casual.

After a hectic weekend of royal obligations, the duchess arrived at the English countryside of Keswick, Cumbria, appropriately dressed in an outdoorsy ensemble from head to toe.

Middleton — accompanied by husband Prince William — was decked out in a utilitarian khaki jacket by British brand Troy London, accentuated by an internal drawstring waist and monogrammed bone buttons. Layered over a white frill-neck top, the piece also stood out in contrast to her skinny black jeans, which made way for a pair of boots that eagle-eyed royal fashion fans would undoubtedly recognize.

Thank you to everyone in Keswick for the fantastic welcome for The Duke and Duchess of Cambridge – where they celebrated the work of local heroes, volunteers and those supporting the rural community in Cumbria. pic.twitter.com/yQRt8LjNBd

The suede combat boots — designed by See by Chloé, an offshoot label of the French fashion house — featured leather trim detailing on a round-toe, lace-up base. Expectedly already sold out, the shoes are made even more distinctive for their heavy rubber sole and stacked heel.

Today The Duke and Duchess of Cambridge are celebrating the work of local heroes, farmers, volunteers and those supporting the rural community in Cumbria – starting in Keswick! 🇬🇧👋 pic.twitter.com/SMx7h1i1ec

Middleton has worn the boots in at least two other occasions this year.

For her first royal engagement of 2019, the duchess met with volunteers at King Henry’s Walk Community Garden in Islington, London, where she made headlines for an understated look composed of a Dubarry tweed jacket, similarly skinny jeans in olive and the See by Chloé shoes.

She also donned the pair during an appearance at the Scouts headquarters at London’s Gilwell Park in March, complementing the boots with a Barbour khaki jacket over a J.Crew sweater and the same black jeans.

Click through the gallery to see more of Kate Middleton’s go-to shoes.

FN spotlights these celebrities in their work boots.