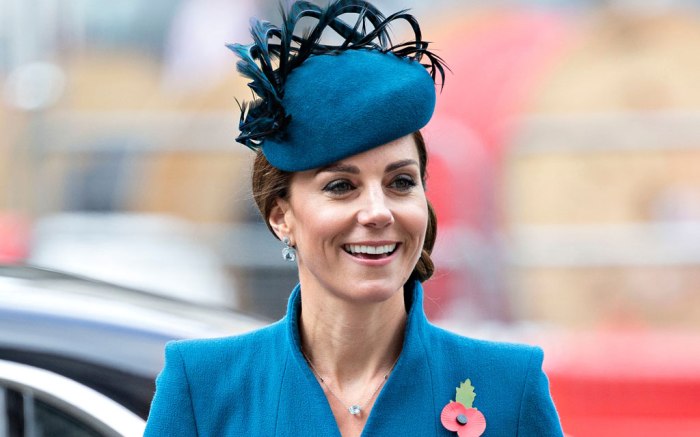 The Duchess of Cambridge wore a coatdress by Catherine Walker, which featured long sleeves and a flowing skirt.

For footwear, the 37-year-old went with green Emmy London Rebecca pumps. The sleek court shoes appear to be a new go-to for Middleton, who is known for recycling her most loved wardrobe items. Designed and handmade in London, the Rebecca features a 4.5-inch heel set straight to flatter the foot.

The mother of three pulled together her ensemble with Kiki McDonough jewelry and a Rosie Olivia fascinator that was adorned with striped feathers.

The duchess was joined by brother-in-law Prince Harry, who made a surprise appearance after his name was left off the schedule. The prince and wife Meghan Markle are expecting their first child any day now, but fans took the public outing as a sign that the new baby had not yet arrived.

As for Middleton, this marked her first officially scheduled appearance of the month. However, she was spotted out for Easter services last Sunday in Windsor, England, alongside husband Prince William and grandmother-in-law Queen Elizabeth II — wearing the Emmy London heels in a different colorway.

Swipe through the gallery to see more of Kate Middleton’s go-to shoes.

Watch the video below to see Carrie Dragshaw’s tips for walking in high heels.