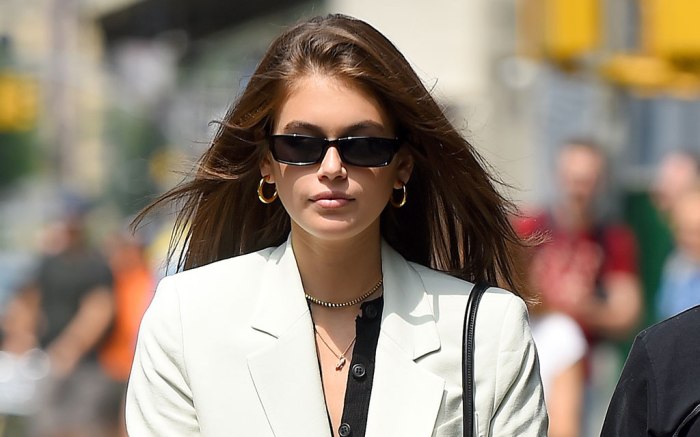 When you’re one of the world’s most sought-after models, what do you wear for summer in the city?

The 17-year-old was spotted out and about in New York yesterday alongside Tommy Dorfman. She looked chic for the outing in a cream-colored blazer worn over a navy Brandy Melville sweater and daisy dukes — the perfect choice for flaunting supermodel legs.

On her feet, Gerber sported Converse Chuck Taylors, her go-to sneaker when she’s off-duty. The teen went with the sneakers — released initially in 1917 as the first basketball shoe — in white. The classic kicks feature a white rubber sole and toe cap, with a canvas upper; they retail for $55 and can be shopped on Nordstrom.com now.

Meanwhile, Dorfman, one of her close pals, went for an all-black look in a T-shirt, baggy basketball shorts and a Nike baseball cap.

For footwear, the “13 Reasons Why” actor added a bit of color, choosing Under Armour’s 2018 Pride sneakers, a Hovr Sonic with Pride rainbow-striped soles. The sold-out shoes (previously priced at $110) boast a rainbow sole, a soft knit upper and a ventilated midfoot panel. In addition to the shoes, UA partnered with Athlete Ally, an organization that aims to foster an inclusive, enriching environment for all athletes, to provide support the LGBTQ community.

Click through the gallery for more of Kaia Gerber’s Converse style.