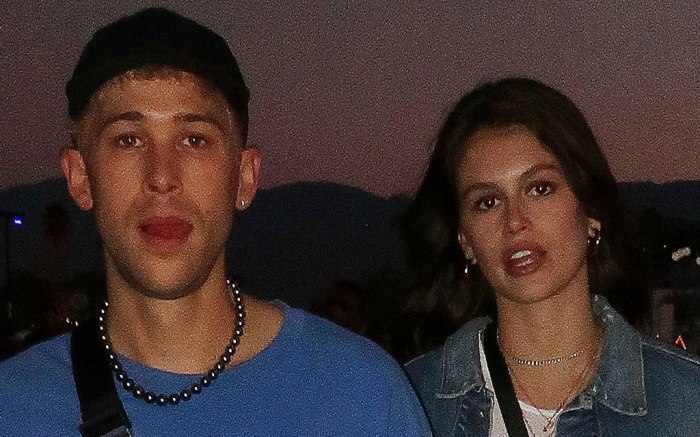 Kaia Gerber looked just like mom Cindy Crawford in a leggy double-denim look as she stepped out to day 1 of Coachella in Indio, Calif. last night.

The supermodel was accompanied by pal Tommy Dorfman, an actor known for their work on “13 Reasons Why.”

Gerber looked stylish in a cropped R13 jean jacket priced at $695, which she teamed with denim cutoff shorts. For footwear, the 17-year-old selected Frye Harness 12R boots. Made in the U.S., the shoes feature a rubber outsole perfect for navigating the dusty desert floor. Gerber’s pair were black leather with a silver-tone harness detailing and a chunky block heel; the boots cost $388.

The teen accessorized with layered necklaces, hoop earrings and an Alexander Wang Attica mini fanny pack (a go-to piece of hers that features chain detailing and exposed zippers).

Meanwhile, Dorfman was stylish in a blue Nike T-shirt with a purple miniskirt that had a sheer overlay. The 26-year-old — known for their gender nonconforming style — selected beat-up white sneakers with black accents for shoes.

They finished their look with a baseball cap, a beaded necklace and a series of bracelets.

Naturally, Gerber’s makeup game was on point as a YSL Beauty ambassador. The runway fixture took part in the luxury house’s pop-up activation while making the rounds at Coachella events. While many activations were invite-only, the brand’s beauty-fix station was open to the public, where customers were able to purchase new products and customize lipstick.

Click through the gallery to see more of Kaia Gerber’s street style.