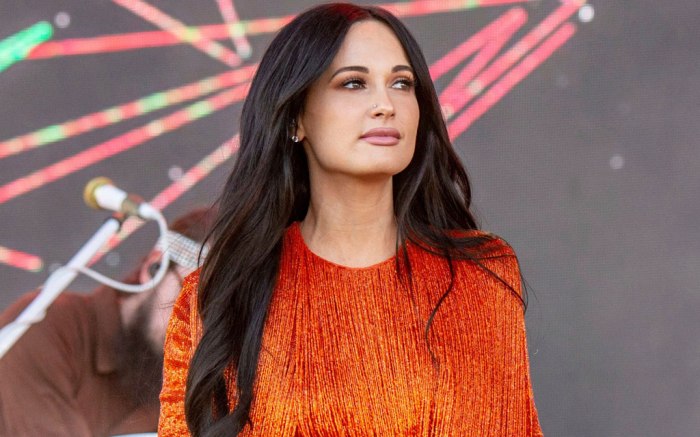 Kacey Musgraves made her Coachella debut in style this weekend.

Coming fresh off a four-win Grammy season, the “Golden Hour” songstress dazzled onstage in a Balmain minidress. The orange dress featured fringe detailing throughout, with long sleeves and a thigh-skimming hemline. The 30-year-old belted the dress at the waist to show off her slim figure.

For footwear, Musgraves went with gold Stella Luna pumps. The shoes featured a pointed toe and a stiletto heel. During her set, though, the country star kicked off her heels, opting to go barefoot as she flitted across the stage.

After opening her set with hit “Slow Burn,” the songwriter brought out Instagram star Baddie Winkle, the 90-year-old known for her grandma antics. The pair danced onstage to Musgraves’ “High Horse.” Other songs off the setlist included “Rainbow,” “Happy & Sad,” “Lonely Weekend” and “Butterflies.”

A smattering of stars stepped out for the performance, including Gigi and Anwar Hadid with older half-sister Alana. Other performers last night included Jaden and Willow Smith, Yungblud and Janelle Monae.

Plenty of artists are still on tap for the weekend, including Billie Eilish, Ariana Grande, Kid Cudi, Khalid and J Balvin.

Swipe through the gallery to check out Kacey Musgraves’ red carpet style.