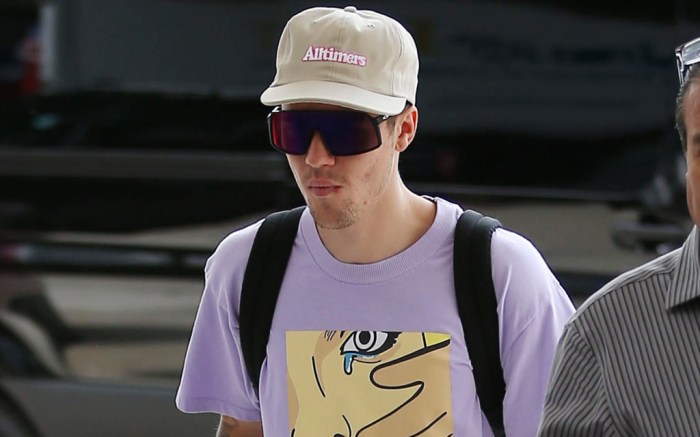 Justin Bieber had a busy day in Los Angeles yesterday, when fans spotted him wearing the same shirt with two different shoe styles.

Earlier in the day, the “What Do You Mean?” singer stepped out in a lilac T-shirt from his brand Drew House with a pop art-style face printed on it. He paired the tee with a black beanie, a leather backpack, Champion athletic shorts and, on his feet, light gray New Balance sneakers.

His New Balance 997H sneakers, in gray, teal and pink, retail for $90 and comes in six different colorways.

Later in the day, he traded his kicks for a pair of white slippers from Drew House that he wore over a pair of the brand’s socks, all with the smiling yellow emoji logo. He also switched his beanie for an Alltimers tan hat and swapped his Champion shorts for cut-off corduroys in the same color.

This outing isn’t Bieber’s first time rocking the lilac shirt. Back in July, he chose the top for an outing with wife Hailey Baldwin as the two attended church in Los Angeles.

For that look, he wore a pair of matching lilac painters’-style corduroys and Nike x Off-White shoes; StockX carries the shoes, with a starting price of $2,165.

Click through the gallery to see Justin Bieber and Hailey Baldwin’s couple style.