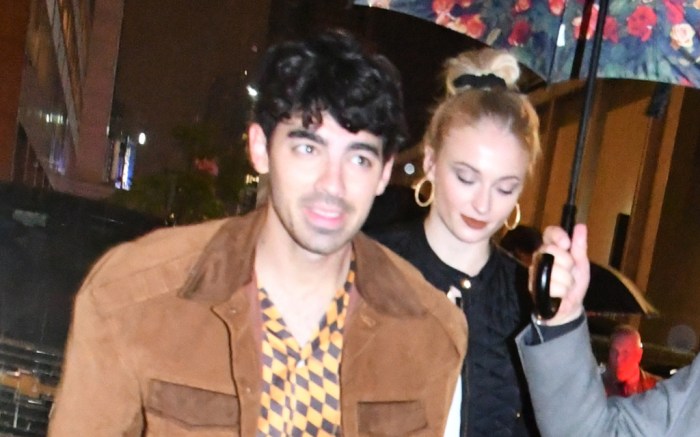 Performing on “Saturday Night Live” is a big deal, but that doesn’t mean the musical guests have to get dressed up for the after-party.

After singing alongside brothers Nick and Kevin on last night’s episode, Joe Jonas was spotted in a casual look as he headed to the after-party with wife Sophie Turner.

Joe looked stylish in a brown corduroy jacket and matching, fitted pants. He wore a yellow and black checked button-up top underneath. For shoes, the 29-year-old DNCE frontman went with classic white sneakers.

Meanwhile, Turner was chic in an all-black ensemble. The 23-year-old “Game of Thrones” star sported a black quilted jacket over a fitted white T-shirt, which she wore tucked into gray skinny jeans. On her feet, the actress had on shiny black knee-high boots with a chunky heel. She wore her hair pulled back into a messy bun, accessorizing with oversized gold hoop earrings and a black purse with gold hardware.

Yesterday’s performance marked a return to the “SNL” stage for the Jonas Brothers, who first hit the sketch show’s stage in 2009. The boys sang a mix of songs old and new last night, treating fans to their hit “Burnin’ Up” while wearing coordinated red and black outfits.

Click through the gallery to see Joe Jonas and Sophie Turner’s couple’s style.

Watch the video below to see how to clean shoes using champagne.