Sophie Turner and Joe Jonas Stroll Through New York in $2,000 Worth of Designer Shoes 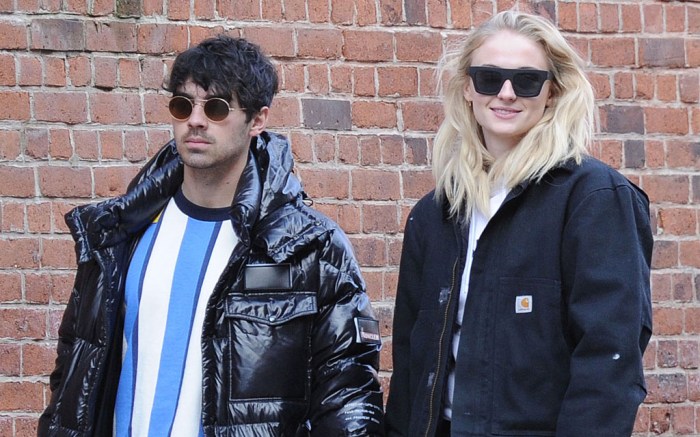 With the Jonas Brothers’ newest single, “Sucker,” debuting at No. 1 on the Billboard Hot 100, the members of the band have been celebrating with the stars of the music video, their fiancées and wives.

Yesterday, Joe Jonas stepped out with his bride-to-be, Sophie Turner, for a stroll through New York’s Soho neighborhood. While Jonas went for a pop of color in a blue and white striped shirt and puffer jacket, Turner played it cool in a graphic sweatshirt and Carhartt jacket.

The couple stepped it up when it came to footwear, both wearing statement designer shoes: Jonas chose a set of bright blue sock-style Speed Trainers from Balenciaga that retail for $770, and Turner had on a pair of Louis Vuitton’s $1,350 Archlight Sneaker Boots.

Earlier in the week, Joe took to Instagram to celebrate the news of their hit song reaching the top of the charts with a comedic post.

You guys are absolutely incredible. #1 debut on the @Billboard Hot 100??? Are you kidding me!? We are so grateful and we love you guys so much. Thank you @republicrecords @ryantedder @frankdukes @philymack and everyone else on our amazing team. Can you believe this is only the beginning? 👀 #Sucker