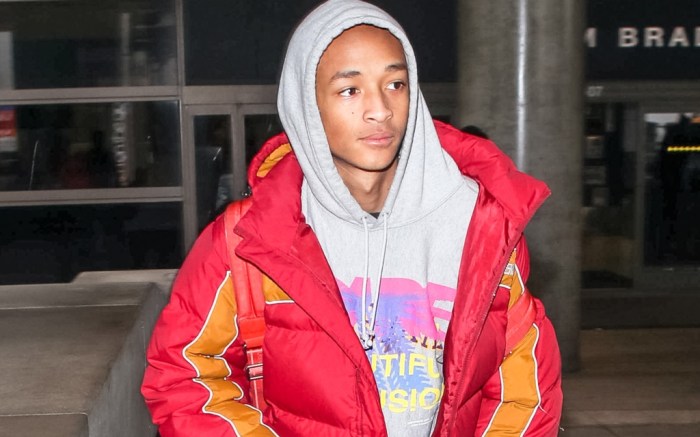 After making an appearance at the Louis Vuitton fall ’19 show with sister Willow Smith on Tuesday, Jaden Smith was spotted arriving at LAX airport yesterday rocking a cozy look complete with women’s sneakers.

The 20-year-old son of Will and Jada Pinkett-Smith was snapped touching down in L.A. wearing a gray hoodie and black pants from his own MSFTSrep clothing brand with a red padded Supreme jacket featuring an orange stripe detail across the front.

For shoes, the “Icon” rapper showed off a retro-looking pair of white leather New Balance 650 sneakers coming with blue-teal accents. Smith is known for being a fan of women’s clothing and footwear — he wore the Louis Vuitton Archlight sneaker designed for women nonstop last year. The multihyphenate has also been seen in affordable New Balance shoes on a number of occasions.

The “Skate Kitchen” actor, who has modeled Louis Vuitton’s women’s clothes for the label before, completed his look with a bright orangey-red leather Louis Vuitton backpack.