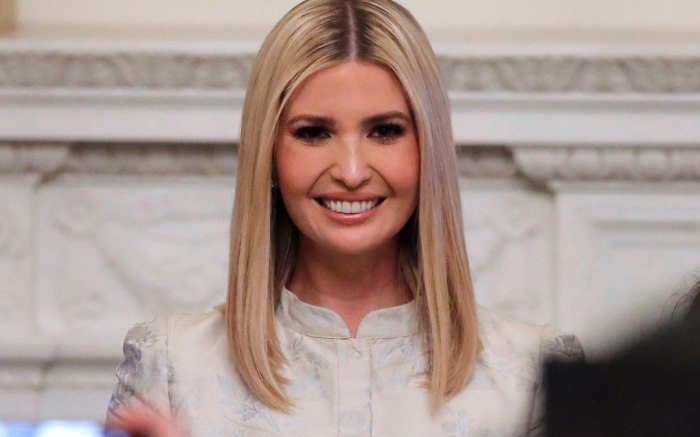 Ivanka Trump didn’t let a trip to the Great Outdoors get in the way of her sartorial sensibility.

In an Instagram post yesterday from a camping vacation with husband Jared Kushner and their three kids, the 37-year-old wore a look worthy of official White House business.

Trump sported a red midi dress with black lace detailing on the sleeves and a pattern throughout.

Rather than opt for her typical soaring stilettos, however, the first daughter went with a more sensible option — selecting a pair of flats. Her shoes — which boasted a knit upper and a pointed toe — were from Rothy’s. (The flats are available to shop on the brand’s website for $145).

This isn’t the first time Trump has reached for Rothy’s. A navy pair of flats from the company was her choice during a trip to Ethiopia in April.

Meghan Markle is also a fan of Rothy’s, an eco-friendly start-up launched in San Francisco in 2016. Its chic flats, made from recycled water bottles, quickly garnered a cult following — and interest in the brand sky-rocked in 2018 thanks to the Duchess of Sussex.

After Markle wore a pair of Rothy’s Point flats on a trip to Australia in October, the label saw a three or four times increase in sales of that style.

“The whole team is excited that Meghan’s decision to swap her heels for flats has introduced so many new women to the brand, and inspired them to do the same,” Rothy’s COO and president Kerry Cooper told FN in October.

Flip through the gallery to see more of Ivanka Trump’s style.

Watch the video below to see Tory Burch and Tabitha Simmons talk their careers, motherhood and more.