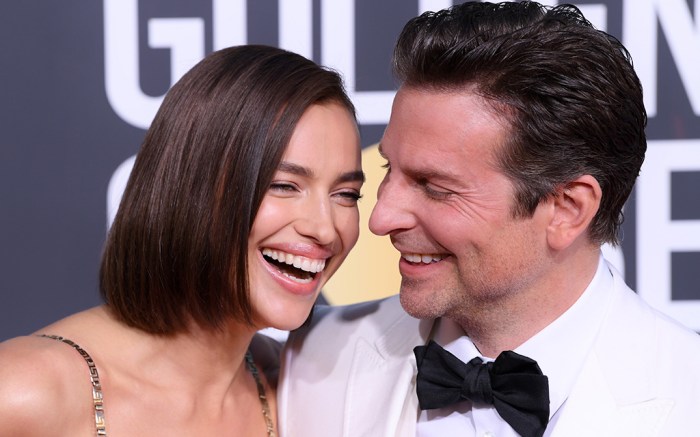 Tonight’s Golden Globes are a big deal for Bradley Cooper: The “A Star Is Born” actor and director has the chance to pick up two statues.

But when the 44-year-old stepped out on the Los Angeles red carpet, all eyes were on his partner, model Irina Shayk.

Shayk glistened in a golden gown that put her supermodel figure on full display. Apart from the gold embellishment, the gown was sheer — with a high slit that showed off the star’s long legs.

The 33-year-old completed her glamorous ensemble with soaring golden sandals that made her (she is believed to be around 5 foot 10) seem even taller than she is. Shayk’s brunette bob was worn straight and down, and she wore natural makeup, with rose-colored lipstick.

Meanwhile, Cooper was dapper in a white tuxedo. The “Silver Linings Playbook” actor wore a black bowtie around his neck, with shiny black shoes on his feet.

In “A Star Is Born,” Cooper plays the role of Jackson Maine, a country crooner who suffers from addiction issues despite a successful career. The character’s life changes when he meets Lady Gaga’s Ally, an aspiring songstress working as a waitress. Ally and Jackson fall in love, and her music career blossoms as her partner’s career begins to fade.

Click through the gallery to see more celebrity arrivals on the red carpet at the 2019 Golden Globe Awards.