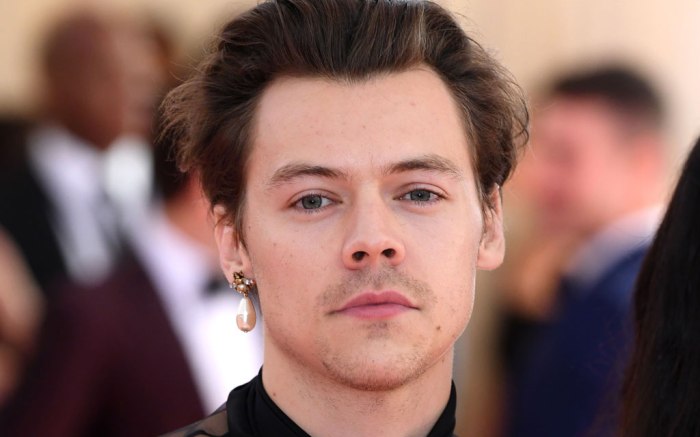 Harry Styles went for an androgynous look tonight at the 2019 Met Gala in New York.

The ex-One Directioner hit the red carpet in an edgy all-black look that included a sheer top with flouncy ruffled sleeves and baggy black pants by Gucci. He kept the all-black theme going with his footwear, selecting shiny black shoes with an almond-shaped toe.

He accessorized with a series of rings and a pearl earring in one ear.

The “Sign of the Times” hitmaker is one of the hosts of this year’s Met Gala, alongside “Love Game” singer Lady Gaga and 23-time Grand Slam tennis champion Serena Williams. The theme is “Camp: Notes on Fashion” — a play on a Susan Sontag essay from the ’60s.

“Camp is esoteric — a private code or badge of identity,” Sontag wrote in the essay, citing “Swan Lake,” Tiffany lamps and the art deco movement as examples.

Styles is known for his fashion chops and often steps out in patterned suits for awards shows and onstage at concerts. He is also a big fan of the Chelsea boot. A photo of the shoe style sent his heart rate through the roof during a 2017 interview with BBC radio host Nick Grimshaw.

“Would you say that’s the biggest love of your life: the Chelsea boot?” Grimshaw asked him.

“Probably,” Styles said with a laugh.