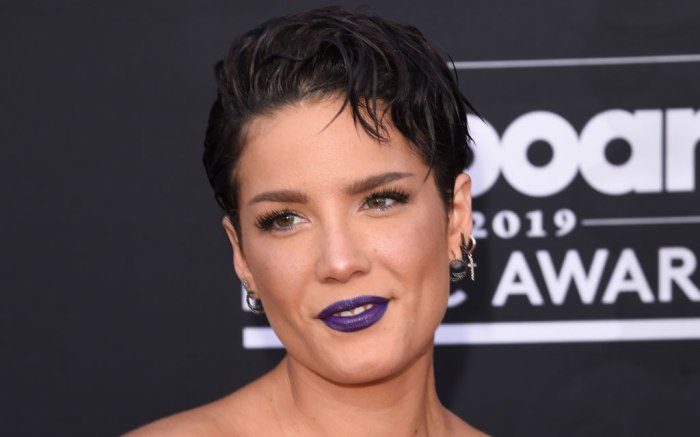 Halsey made a stylish arrival on the red carpet at the Billboard Music Awards in Las Vegas tonight.

The “Bad at Love” singer stepped out in a black and blue strapless dress with a low neckline and dangerously high slit. The dress featured sheer detailing in flattering places, highlighting Halsey’s toned figure.

For footwear, the 24-year-old reached for ankle-strap sandals with gold buckle detailing and a shiny patent leather finish.

She went for a goth-glam beauty vibe, going for a bold dark blue lip.

The A-lister will sing “Boy With Luv” tonight alongside BTS at the BBMAs.

Prior to her performance with the K-pop group, Halsey gifted the BTS boys friendship bracelets. Each of the bandmates received a sparkly pink bracelet from the star, who frequently sports the feminine color.

Other performers at the BBMAs include the Jonas Brothers, Taylor Swift and Brendon Urie, and Billie Eilish. Kelly Clarkson — who is hosting the show for the second straight year — is also slated to sing.

Cardi B leads the nominations with 21. She’s followed by Post Malone and Drake, who have 17 each.

Click through the gallery to see more celebrities arriving on the red carpet at the 2019 BBMAs.

Watch the video below for a behind-the-scenes look at FN’s cover shoot with Meek Mill.