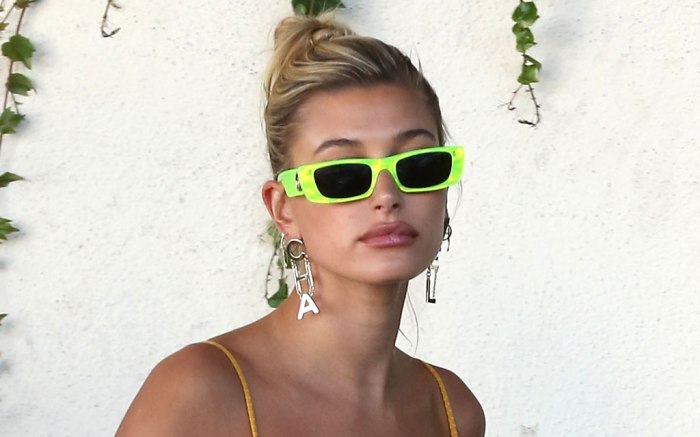 The 22-year-old wore two different pairs of the skatewear company’s shoes Wednesday in Los Angeles, teaming the first with a flirty, feminine ensemble and the second with a casual, streetwear-inspired outfit.

For her first look, Baldwin wore a Reformation outfit including a mustard-colored tank top and flower-embroidered high-rise jeans. The top sells for $38; the pants for $128.

The model’s shoes were black Vans Old Skool sneakers. The classic kicks have a textile and leather upper with a rubber sole. The shoes are on sale at Nordstrom.com for $55.

She finished off her look with a pair of neon green Gucci sunglasses ($375 on Shopbop.com) and Chanel logo earrings.

Later in the day, Baldwin switched into another outfit as she attended church with husband Justin Bieber. The 2017 FN Style Influencer of the Year wore Off-White sweats ($433 on Farfetch.com), a yellow Balenciaga T-shirt ($450 on Luisaviaroma.com) and an oversize leather jacket.

Her second pair of kicks were bold red Vans Sk8-Hi sneakers with checkerboard foxing tape between the canvas upper and the rubber outsole. The shoes are available to shop on Tillys.com for $65.

In recent months, Baldwin has chosen Vans several times, including at a Coachella event in April. Other celebrity fans of the brand include Gwen Stefani, Kristen Stewart and Anwar Hadid.

Flip through the gallery for Hailey Baldwin’s best shoe moments.