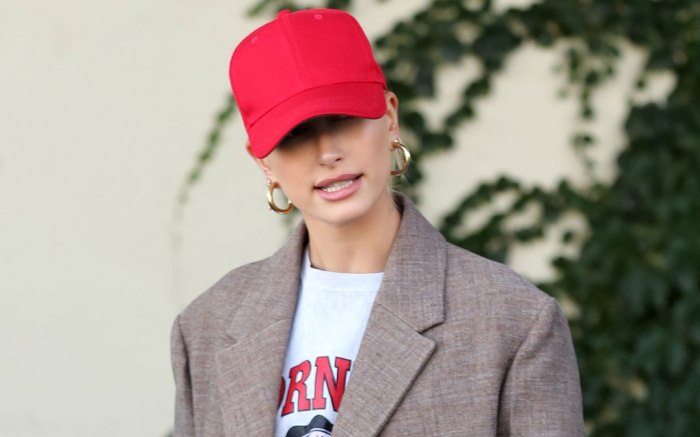 Of course Hailey Baldwin has autumn’s trendiest shoe in her wardrobe.

The 22-year-old supermodel wore the season’s hottest sandals with a casual look yesterday while out and about in Los Angeles. Baldwin’s ensemble consisted of a Jil Sander blazer ($3,130 on Farfetch.com) layered over a Cornell University crew neck and slim white jeans.

On her feet, the “Drop the Mic” co-host sported her Bottega Veneta quilted square-toed sandals — dubbed one of the “It” shoes of fall ’19 — in a cherry red colorway that’s exclusive to Mytheresa.com.

The sandals have a ’90s-inspired square toe, a major trend that was arguably orchestrated by Bottega designer Daniel Lee, with a buttery soft lamb-leather upper and a stiletto heel. Stylish celebrities like Rihanna and Rosie Huntington-Whiteley are also fans, and the style has found a home among fashion’s elite as well, having appeared on the streets outside runway shows in New York, London, Milan and Paris.

While she opted for heels yesterday, the 2017 FN Style Influencer of the Year typically goes for more casual footwear on the streets. Sneakers and combat boots make up much of her wardrobe, with favorite brands including Dr. Martens, Adidas and Vans.

Flip through the gallery to see more of Hailey Baldwin’s best shoe moments.