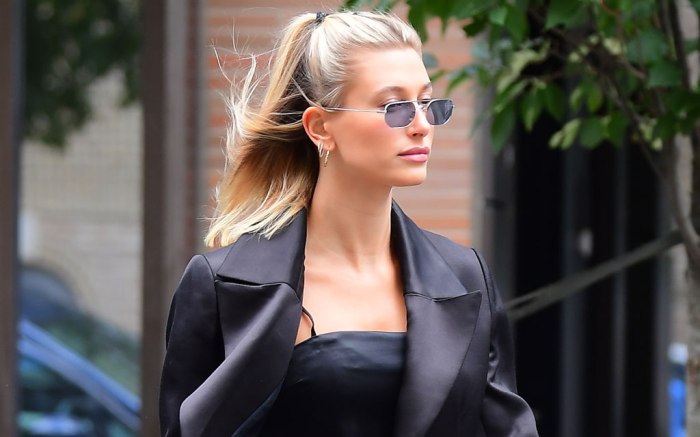 Hailey Baldwin went with a sleek, all-black look at New York Fashion Week yesterday — adding a sparkly pop to her look with crystal-studded sandals from one of 2019’s hottest shoe designers.

The 22-year-old was spotted out and about wearing a look from Marina Moscone: a blazer and a bustier dress.

For footwear, the supermodel went with black suede sandals with crystal trim from Amina Muaddi. The shoes have a 3.7-inch pedestal heel, with an adjustable ankle strap and a leather lining and sole. They’re available on Neimanmarcus.com for $1,010.

Muaddi, a 33-year-old Jordanian-Romanian designer, launched her eponymous label last October after breaking away from a brand she co-founded, Oscar Tiye. After picking up the FN Achievement Award for Launch of the Year last December, Muaddi has quickly amassed a strong following — with fans including Kendall Jenner, Rihanna and Dua Lipa.

“For a girl who comes where I come from — I’m half Jordanian and half Romanian — to be here, to be able to live my dreams and inspire Middle Eastern women to live their own dreams and be able to dress women I could have never imagined I’d be able to dress, it’s an honor,” Muaddi said in her FNAA acceptance speech.

While Baldwin began her NYFW in all black, she was quick to switch to a lighter color palette at the Alexander Wang x Bvlgari party yesterday night.

The A-lister — who herself is an FNAA recipient, having won the 2017 Style Influencer of the Year honor — sported an all-white look from Wang’s spring ’20 collection. She wore a white dress and pointy booties with perforated logos.