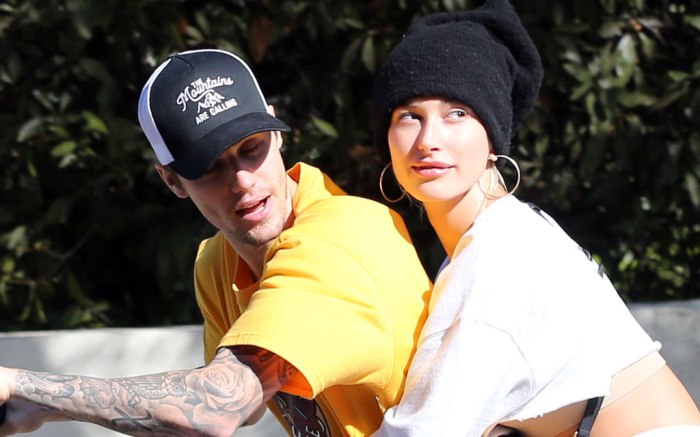 Hailey Baldwin is into the athleisure look — and she stuck with the trend Saturday for a bike ride and studio visit alongside husband Justin Bieber in Los Angeles.

For shoes, the “Drop the Mic” co-host opted for casual white sneakers: Nike Air Force 1s. The Air Force 1 features a leather upper, silver hardware and rubber outsole; it was initially launched in the 1980s as a basketball shoe before becoming a lifestyle silhouette.

Baldwin’s chosen kicks can be shopped on Nike.com, with a $90 price tag. The 2017 FN Style Influencer of the Year accessorized with a black knit beanie and a Louis Vuitton bum bag ($1,820 on Louisvuitton.com).

Meanwhile, Bieber wore a yellow graphic T-shirt and purple shorts from his Drew House label. On his feet, the “Baby” pop star wore Crocs, which have become one of his go-to shoes, layered over white crew socks. Bieber owns the foam clogs in a number of colors but yesterday’s pair was bright yellow and loaded with the brand’s Jibbitz charms. The clogs can be purchased on Kohls.com now for $35.

When it comes to style, Baldwin told FN she likes to embrace a “tomboy chic” look.

“I like boys’ clothes,” the model said. “There’s something super-cool about a pretty girl who can put on a baggy pair of jeans and heels, and have this sexy tomboy vibe.”