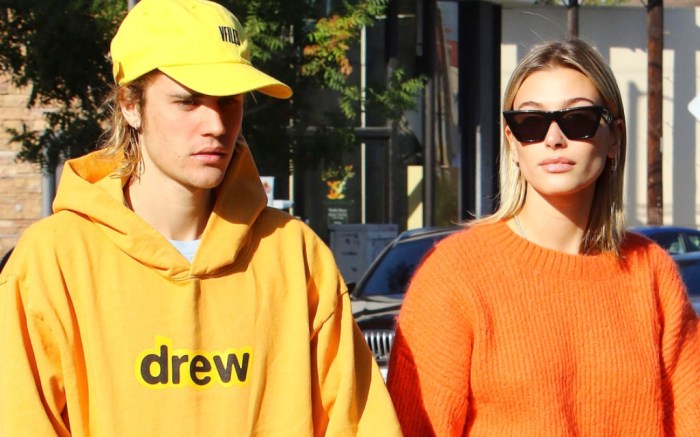 It was revealed today that Justin Bieber and Hailey Baldwin are on the cover of Vogue’s March issue.

Shot by Annie Leibovitz, the young newlyweds cuddle up and get playful for the shoot while wearing designer duds. On the cover, the 24-year-old goes shirtless, showing off his tattoos while holding on tight to his bride, who wears an off-white embellished gown.

Within the pages, the 22-year-old model also dons a romantic floral print Stella McCartney spring ’19 playsuit, a Valentino spring ’19 frock and a Dolce & Gabbana bikini with a matching shirt. One of Baldwin’s standout outfits consists of a dusty-pink Dior spring ’19 gown and ballet slippers. The look debuted on the catwalk at Paris Fashion Week last fall. For the full look, check out Vogue’s instagram.

Baldwin told the magazine of being a newlywed: “I want people to know that. We’re coming from a really genuine place. But we’re two young people who are learning as we go. I’m not going to sit here and lie and say it’s all a magical fantasy. It’s always going to be hard.”

Meanwhile, Bieber got candid struggling with opening up. “It’s been so hard for me to trust people, I’ve struggled with the feeling that people are using me or aren’t really there for me, and that writers are looking to get something out of me and then use it against me. One of the big things for me is trusting myself.”

For more of Justin Bieber and Hailey Baldwin’s couples style, check out the gallery.