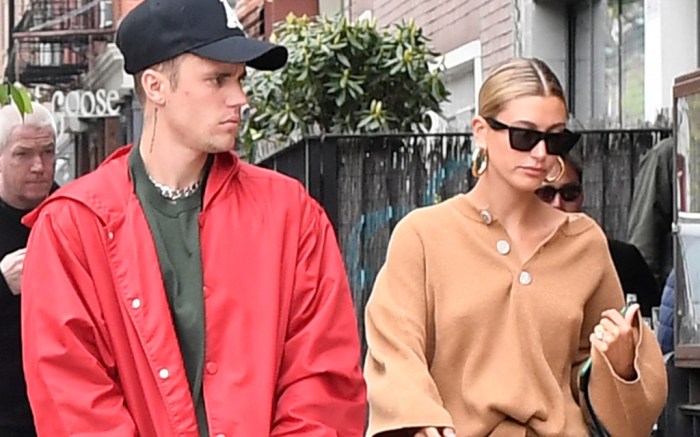 Justin and Hailey Bieber (née Baldwin) went for a joy ride around the neighborhood yesterday, with Mrs. Bieber on the back of the bike.

The couple was spotted biking around Beverly Hills, Calif., where they now reside. Justin represented his brand Drew House with a signature smiley-face T-shirt and a pink beanie that he matched to corduroy pants and a set of brown suede sneakers.

Hailey also kept it casual in a striped tee, loose-fitting black pants and a pair of black and white Vans sneakers; similar styles retail for $60.

She wore another style from the skate-chic brand earlier this week; the Vans x Rhude’s retro-inspired sneaker collab are available on Farfetch.com for $205.

Aside from bike rides, Hailey spent her Sunday attending Kanye West’s Sunday Service performance and watching other performances at the Camp Flog Gnaw festival in Los Angeles. She was joined by friends including actress Yara Shahidi for the shows.

Justin spent the rest of his weekend supporting YouTube star Logan Paul in his fight versus fellow YouTube personality KSI. Though Paul lost due to critical point deductions, the “What Do You Mean?” singer still shared his support on Instagram with a picture from the match captioned: “REALITY .. LOGAN PAUL CHAMPION.”