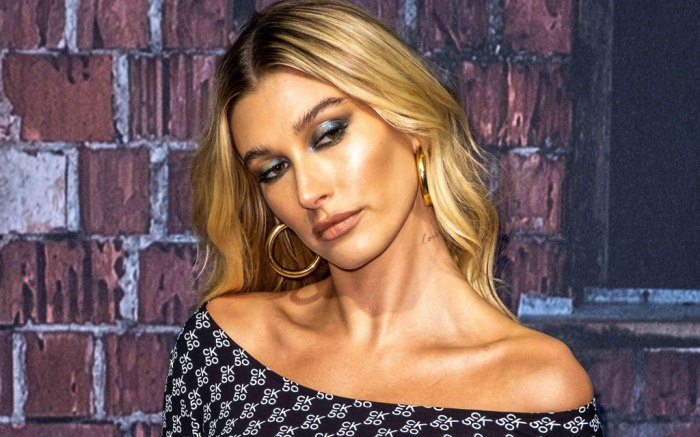 On her feet, Baldwin wore Jimmy Choo’s Anouk pumps, which feature a 4.7-inch stiletto heel, a textured burgundy upper and a pointed toe. The shoes have a low-cut vamp, a detail that extends the length of the leg, making the wearer appear taller. The versatile shoe takes its name from French actress Anouk Aimée, a style icon of the 1960s.

The A-lister accessorized her look with hoop earrings from Jennifer Fisher.

When it comes to her personal style, Baldwin told FN she favors a “tomboy-chic” aesthetic.

“Being comfortable is really important. Even if I’m in heels, I make sure I’m in sweats or not something that’s super tight from top to bottom,” she said in a 2017 interview. “I also like doing something really simple, such as wearing a minidress with thigh-high heels because I like that ’90s long-leg vibe.”

Baldwin stars in Calvin Klein’s 50th anniversary campaign alongside husband Justin Bieber. Over the years, she has fronted advertisements for labels such as Levi’s, Tommy Hilfiger and PrettyLittleThing. Baldwin has also appeared on the runway for top brands such as Versace, Moschino and Off-White.

Flip through the gallery to see more of Hailey Baldwin’s standout shoe style over the years.