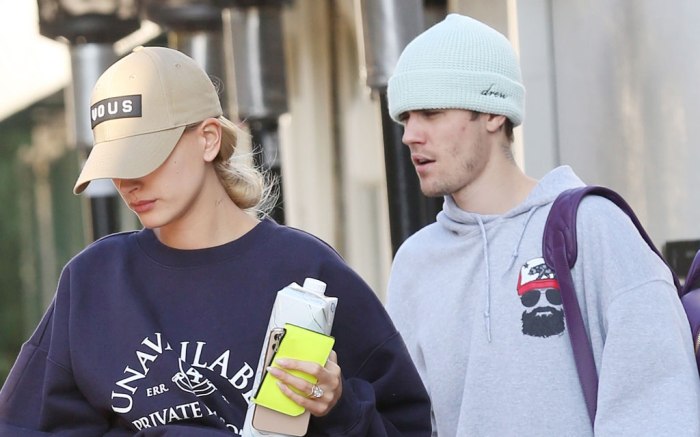 The couple that does athleisure together, stays together — just ask Justin Bieber and Hailey Baldwin.

For shoes, the supermodel selected Bristol Studios x Adidas BYW Crazy sneakers, a sold-out silhouette that debuted in November 2018. The shoes are executed in blue and white hues, with a wavy, elevated sole adding a dad shoe-esque element.

The 2017 FN Style Influencer of the Year accessorized with a Vous dad hat.

Meanwhile, Bieber was causal in a gray hoodie and Umbro checkerboard soccer shorts. The “Baby” hit maker completed his look with white Nike high-top sneakers and a waffle-knit cap from his Drew House label.

White sneakers are a wardrobe staple, and there are plenty of celebrities who are into the trend, such as Kendall Jenner, Brooklyn Beckham and Taylor Swift. The silhouette is particularly popular in the summer months but has become a year-round favorite.

Both Baldwin and Bieber have propelled their style star status into deals in the fashion space. The pair appear together in Calvin Klein’s 50th anniversary campaign. She has worked with Adidas, styling two fashion shows with the Three Stripes and JD Sports, and starred in ads for brands such as Levi’s, Charles & Keith and Bolon Eyewear. He has his own apparel and accessories label, Drew House.

Click through the gallery to see more of Hailey Baldwin’s best shoe moments.