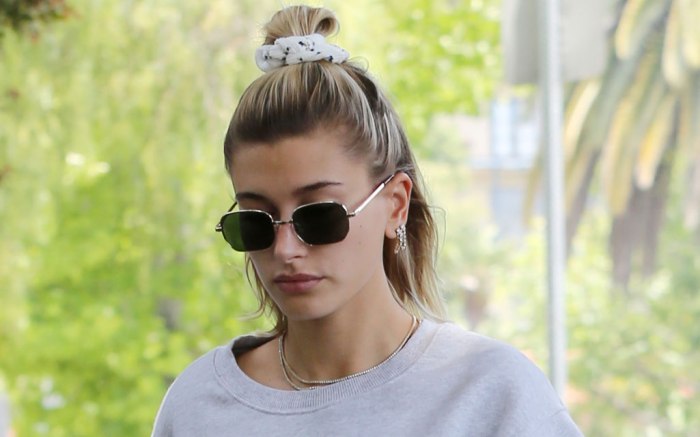 The 22-year-old was spotted in a gray crewneck sweatshirt worn half-tucked into a pair of black Adidas bike shorts.

On her feet, the “Drop the Mic” co-host stuck with the Three Stripes, choosing the brand’s Lxcon shoes. Inspired by a pair of running sneakers from 1994, the Lxcon has a high-profile midsole that’s so ’90s, with a breathable, knit upper and Adiprene cushioning for comfort. It costs $120 and is available on Adidas.com.

The supermodel completed her look with a pair of dark shades and some jewelry (including her $500,000 diamond engagement ring from husband Justin Bieber). She wore her hair in a half-up, half-down style — accessorizing with a scrunchie that added to her outfit’s ’90s vibe.

The Bare Minerals ambassador may have taken shoe inspiration from pal Kendall Jenner. The “Keeping Up With the Kardashians” star wore the same sneakers — styling them with a gray sweatshirt and bike shorts just like Baldwin’s — as the duo hit up a workout class in April.

Baldwin has long been a fan of Adidas sneakers, having styled two JD Sports x Adidas runway shows in London. The A-lister swapped the gray crewneck for a black, logoed Balenciaga sweatshirt and a pair of black Adidas sneakers as she went out with stylist Maeve Reilly later in the day.

In the video below, Hailey Baldwin discusses her iconic street style.