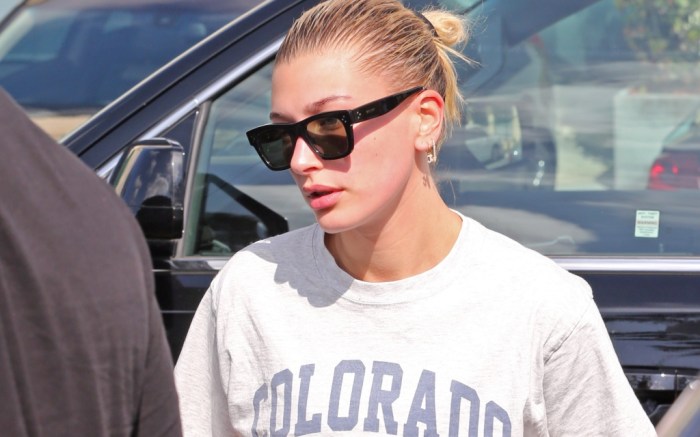 Hailey Baldwin is often one to rock head-turning street style looks, but the model went for an under-the-radar outfit as she stepped out for a hot pilates class in Hollywood, Calif., on Friday.

Mrs. Bieber was snapped sporting a light-gray cropped T-shirt reading “Colorado” across the chest paired with baggy navy blue sweatpants and Adidas’ popular Adilette rubber pool slides in black and white. The style retails roughly from $25 on Ssense.com and other retailers. Her pop star husband Justin Bieber wore the same striped slip-ons just days ago when the couple attended a church service.

The 2017 FN Style Influencer of the Year also showed off sleek square black frames by Celine ($470). She pulled things together with a messy bun and a black scrunchie.

Flip through the gallery for more of Hailey Baldwin’s head-turning street style.

Hailey Baldwin Hits the Streets in an Over-the-Top Green Furry Coat and $1,000 Sneakers With Justin Bieber