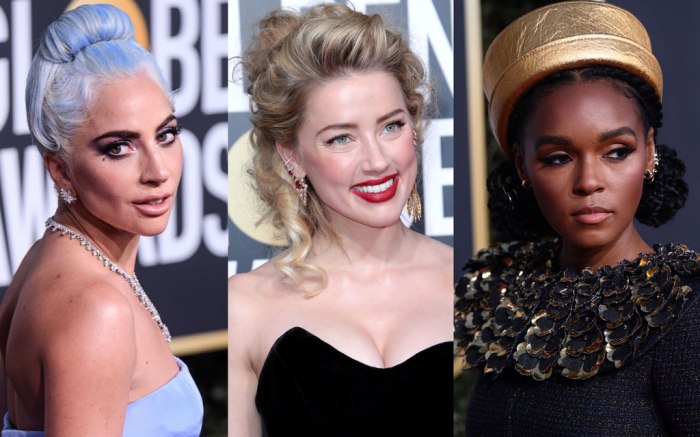 When it comes to fashion, you can’t win over everyone.

As celebrities stepped out in their finest to the Golden Globes tonight in Los Angeles, fans at home tweeted out their thoughts on the red carpet ensembles.

One star to take some negative feedback was Amber Heard. The “Aquaman” actress stepped out in a Monique Lhuillier gown with a black bodice and a cream-colored skirt.

She wore her blond locks in ringlets, leading fans to quip that she looked like Olivia Newton-John’s Sandy from “Grease.”

Amber Heard looks like she’s going for the Sandy at the school carnival look from Grease. Bold choice.

But some fans felt more positively about the star’s look.

“Living for @realamberheard’s energy on the red carpet,” one fan wrote, adding that they also liked her hair and dress.

Living for @realamberheard’s energy on the red carpet. Pulling up her dress, grabbing her date’s?/friend’s hand, smiling and waving 👋🏽 just being genuinely excited and happy to be there! Oh and her hair & dress 👗 👍🏽🌟 #etalkredcarpet @goldenglobes 🏆

Also taking some heat was Lady Gaga. Never one to play it safe, the “Shallow” singer hit the red carpet in a blue gown with a dramatic train. She paired the princessy dress with silver booties by Giuseppe Zanotti. But the bold look didn’t land with everyone.

“It saddens me that Lady Gaga is going to win tonight in an ugly dress,” one Twitter user wrote.

It saddens me that Lady Gaga is going to win tonight in an ugly dress. 🙈 #GoldenGlobes

To some fans, the outfit resembled Elsa’s look in “Frozen” — but the comparisons were complimentary.

“Lady Gaga looked like Elsa from Frozen with her fit and I really dug it,” @getcarter_ tweeted.

My inner fashonista shows up when I see these outfits on the TL, I ain't gonna lie.

Lady Gaga looked like Elsa from Frozen with her fit and I really dug it.

Like Gaga, Janelle Monae took a risk with her red carpet look, stepping out in a Chanel pre-fall ’19 look that came complete with a shiny gold hat.

The risk didn’t land with everyone.

This dress is ugly. Her face is stunning tho. https://t.co/xaKI9DuKuL

“This dress is ugly,” @ToldByMe tweeted, adding that “Her face is stunning tho.”

Monae’s risky look won approval for some other observers, though.

: Janelle Monáe for Golden Globes 2019, once again slaying the red carpet in true goddess fashion. 💅 This feels like a callback to her ArchAndroid album.

Elsewhere, Emma Stone wore a custom silver-embellished pink Louis Vuitton dress that took hours for craftspeople to hand-make. But the artistry of the dress didn’t make it a winner in everyone’s eyes.

“Her dress isn’t ugly, But I think that for her body is extensive, she fits better something adjusted I don’t like the hairstyle!” one Twitter user wrote.

Her dress isn't ugly, But I think that for her body is extensive, she fits better something adjusted
I don't like the hairstyle! pic.twitter.com/66r7Jhfocs

Meanwhile, others praised the style.

“Emma Stone looks so pretty in her pink dress at the #GoldenGlobes” @alyssabailey tweeted.

Emma Stone looks so pretty in her nude dress at the #GoldenGlobes. pic.twitter.com/jQZGnTjJQG