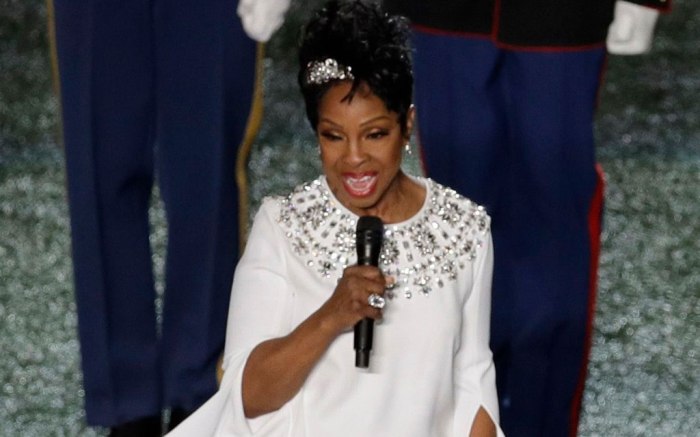 Gladys Knight’s Super Bowl 53 look was all about her sparkly shoes.

The Atlanta native wowed the crowd with her rendition of the National Anthem at her hometown’s Mercedes-Benz Stadium tonight.

The 7-time Grammy Award winner wore a white dress with sparkly detailing at the collar. The frock featured wide sleeves and went down to her knees.

On her feet, the “Midnight Train to Georgia” singer sported glittery silver booties. The shoes had a stiletto heel and a round toe.

The 74-year-old R&B songstress wore her hair in a beehive style, with a sparkly barrette as an accent. She had a glistening silver bangle around her wrist and a statement ring on her finger.

The star, who is known as the Empress of Soul, had glimmering stockings on her legs for a stylish finish.

Knight is the first of several performers to appear at this year’s Super Bowl. At the halftime show, “Girls Like You” hitmakers Maroon 5 will take to the stage, with help from “Sicko Mode” rapper Travis Scott and former Outkast member Big Boi.

Several artists, such as Rihanna and Cardi B, reportedly declined to perform at this year’s Super Bowl. They did so in support of Colin Kaepernick, who was ousted from the NFL after starting a nationwide kneeling movement to protest police brutality.

See more stylish Super Bowl performers from years past, such as Lady Gaga, Beyonce and Katy Perry, by clicking through the gallery.