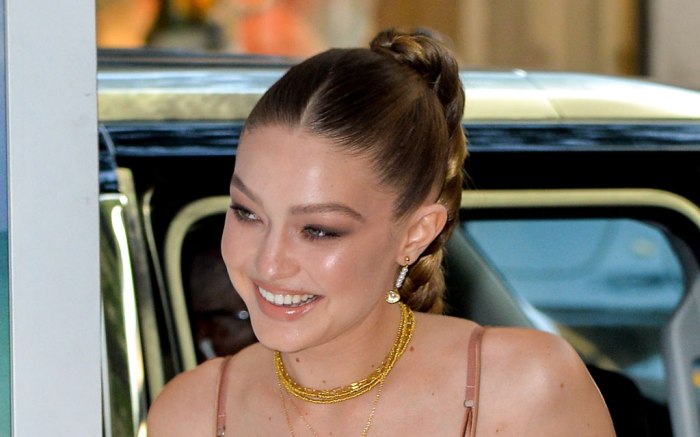 Gigi Hadid always seems to have a handle on the latest trends.

As she attended the launch party for Michael Kors’ Wonderlust perfume last night in New York, the 24-year-old modeled one of the biggest trends of the season: beige.

The supermodel completed her look with layered necklaces and a shell-shaped clutch. She wore her hair pulled back into a long blond braid.

The Reebok ambassador serves as the face of Wonderlust. In one campaign shot for the fragrance, she holds an oversized bottle of perfume on a beach in Turks & Caicos, wearing an orange and pink floral-print dress. An ethereal-looking video depicts the A-lister floating through water in her dress.

Dream office 🏝 So happy to be the newest face of @MichaelKors #Wonderlust. Big thanks and love to @inezandvinoodh and everyone at Kors for turning Turks & Caicos into my own personal Fantasy Island, had the sweetest trip with you all💕 #ad

Hadid’s younger sister, Bella, has also taken on the beige trend. At a Dior x Vogue dinner in Cannes, France in May, the model wore a cropped Dior top with a full skirt, completing the monochrome look with pointy-toed pumps.