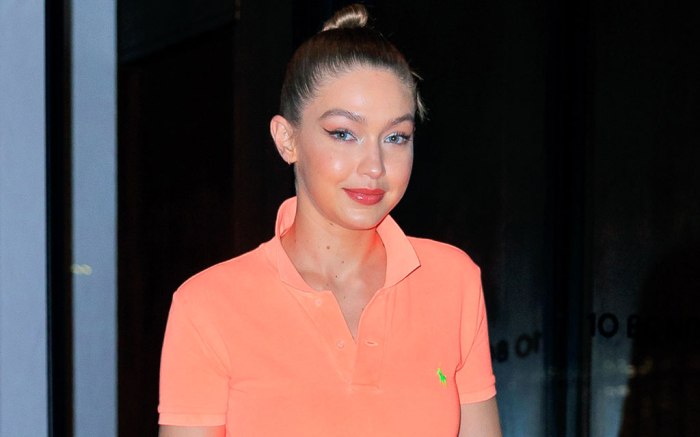 Polo shirts might bring to mind the golf course or a prep school uniform, but there probably aren’t many people who associate the style with a night out on the town.

Bring in Gigi Hadid. The supermodel stepped out to a Maybelline party at New York Fashion Week last night while clad in a bright orange polo shirt from Ralph Lauren.

Hadid wore her shirt with the collar popped and paired it with a silky skirt that went down to her ankles.

For footwear, the 23-year-old — who is styled by Mimi Cuttrell — selected strappy gold sandals with a stiletto heel.

She wore her hair in a twisted updo and went without jewelry.

While orange can be a difficult color to pull off, this isn’t the Reebok ambassador’s first time wearing the shade from head to toe in recent months.

For a December stroll in New York, Hadid wore a Moschino leather trench coat over a silky shirt with just one button done and a pair of high-waisted lacy orange jeans by RVDK. She completed her look with printed Christian Louboutin boots that cost nearly $1,300.

Hadid commanded attention on the Tom Ford runway in a red velvet blazer, a turtleneck and silky pants. Her shoes were red sandals, worn over stockings.