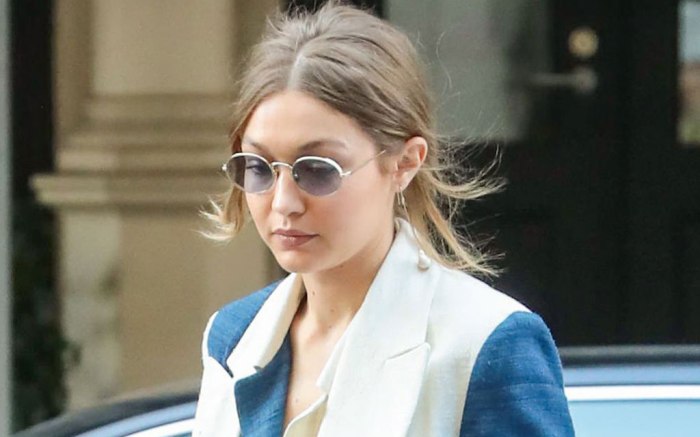 The 24-year-old model hit the streets of New York yesterday clad in an eye-catching blue and white look.

Hadid wore a three-piece Oscar de la Renta spring ’20 pantsuit — jacket, button-up shirt and drawstring pants — that had a blue ombré pattern. Both the jacket and pants are available for pre-order at Modaoperandi.com.

While the suit offered a fun take on business dressing, Hadid gave a look a little country flair, courtesy of her shoes. The catwalker selected white Fendi Western boots with a croc-embossed leather upper, a pointed toe and a wooden block heel with a statement-making cut-out detail. The shoes are sold out on online retailers, including at Farfetch.com.

The A-lister completed her look with a two-tone blue mini bag, silver-framed sunglasses and pearl earrings. She wore her hair in a messy updo.

When it comes to her off-duty style, Hadid likes to keep things comfy — often choosing flat shoes like Dr. Martens boots, Ugg slippers or Reebok sneakers. Reebok in particular is a staple of the “it” girl’s wardrobe, as she is an ambassador for the brand and has a second Gigi Hadid x Reebok collection slated to drop by the end of the year.

Click through the gallery to see more photos of Gigi Hadid’s standout street style over the years.