Here’s How Gigi Hadid Made Her Runway Debut in 2014 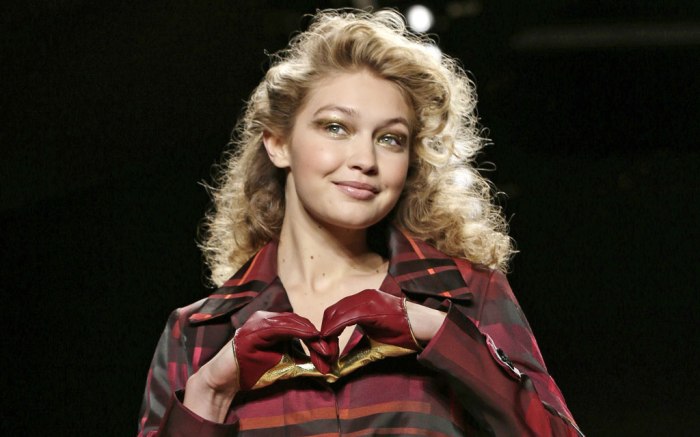 Gigi Hadid may be one of the biggest supermodels in the world, but she was a fresh face just five years ago.

The 23-year-old Dutch-Palestinian beauty stepped out on the runway at the Desigual fall ’14 show in two leggy looks.

The first was a red plaid jacket with gold detailing, worn over a black miniskirt. For footwear, the Los Angeles native wore red-and-black peep-toe booties with a high heel.

She completed the ensemble with a black handbag and a pair of red and gold gloves.

The model then donned a black and gray minidress with a woman’s face on it, which she teamed with black peep-toe booties. The look was finished off with a silver and black pendant necklace and a black handbag.

The Reebok ambassador made her most recent foray onto the runway today, appearing onstage at the Burberry fall ’19 show during London Fashion Week. She hit the catwalk in a white and black top with matching shorts and black mid-calf boots.

As the older Hadid sister, Gigi made her runway debut prior to Bella.

The younger Hadid’s first show was for Desigual as well. She appeared on the spring ’15 show for the Spanish brand in a floral headband, a yellow and white dress and platform sandals.

Click through the gallery to see all of Gigi Hadid’s best street-style ensembles.