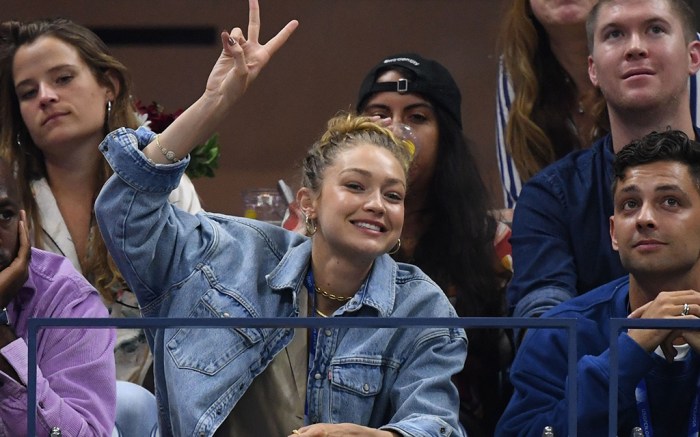 The 24-year-old model sported a Canadian tuxedo — a denim shirt and her favorite Sandro jeans — with a shiny gold button-down shirt underneath.

For footwear, the supermodel went with olive green suede boots from Christian Louboutin. The shoes featured a pointed toe and a sturdy high heel.

Hadid accessorized her look with layered gold necklaces (including one from Missoma) and gold-rimmed sunglasses. She wore her hair scooped up in a bun.

At Arthur Ashe Stadium, Hadid watched Williams defeat opponent Caty McNeely in three sets to secure her spot in the third round. Williams, a Nike athlete, is a six-time U.S. Open women’s singles champion; she is seeking a record-setting 24th Grand Slam title at this year’s Open.

A longtime tennis fan, Hadid also attended the 2018 tournament, cheering on Williams in bike shorts, an oversize button-down shirt and sandal slides for the occasion.

Williams and Hadid are so close that the former presented the latter with the Glamour Woman of the Year Award in 2017. Hadid and sister Bella also came out to support Williams at the premiere of her HBO documentary, “Being Serena,” last April.

Click through the gallery to see more of Gigi Hadid’s street style outfits.

In the video below, influencer Arielle Charnas discusses motherhood, where to shop for kids and more.