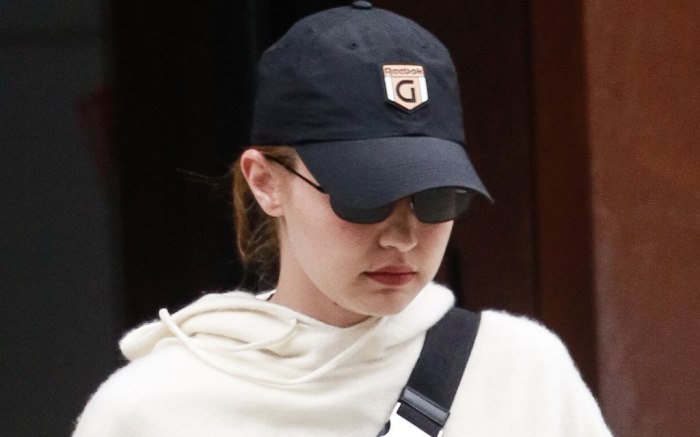 Gigi Hadid has long been a proponent of athleisure wear, and she’s staying loyal to the trend.

The 24-year-old was spotted out and about in New York yesterday clad in a comfy-casual look with her go-to shoes. Hadid sported a super soft cream cashmere hoodie by Mandkhai teamed with Burberry monogram-print track pants.

The pants are from the British heritage labels’s debut Monogram collection, designed by its chief creative officer Riccardo Tisci. The supermodel makes her first-ever campaign appearance for the brand with the collection, appearing in ads wearing the same track pants she stepped out in yesterday. The pants are for sale on Farfetch.com at a $760 price point.

For footwear, the Reebok ambassador went with Dr. Martens boots — one of her go-to shoe styles for the streets. The star selected the brand’s Mono 1460 style, which features a monochrome look with a solid color from the soles to stitching and even lining. The boots are built of Dr. Martens’ smooth leather and feature an air-cushioned sole for comfort. They’re available to shop on Drmartens.com for $140.

The A-lister pulled together her look with a cross-body bag, dark sunglasses and a Reebok baseball cap.