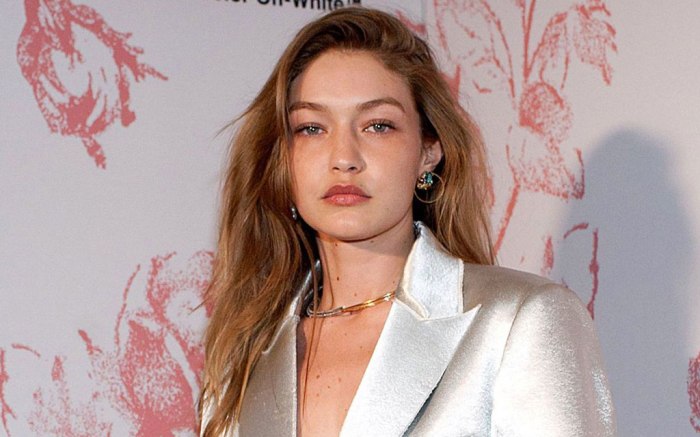 Gigi Hadid fêted the launch of the Off-White x Saks capsule in the coolest outfit.

The Dutch-Palestinian supermodel wore an Off-White look —  a silky cropped blazer with ’80s-style exaggerated shoulders and a low neckline that revealed a flash of her lacy bra with oversized jeans  in a light wash — as she stepped out to last night’s New York dinner celebrating the collection’s launch.

Her shoes were gray and suedelike with a pointy toe.

The Reebok ambassador was joined at the bash by Olivia Culpo — one of the many stars who attended her 24th birthday bash this week. The former Miss Universe wore a one-sleeved white Off-White dress with a plunging neckline and yellow snakeskin detailing. For shoes, Culpo selected shiny black heeled boots with a pointed silhouette.

Virgil Abloh, creative director of Off-White, was dressed in a casual look at the launch, showing up in a denim jacket and paint-splattered beige pants. On his feet, the 38-year-old 2017 FN Achievement Award Shoe of the Year winner sported purple sneakers.

Watch the video below to see Virgil Abloh and more stars at the 2017 FNAAs.