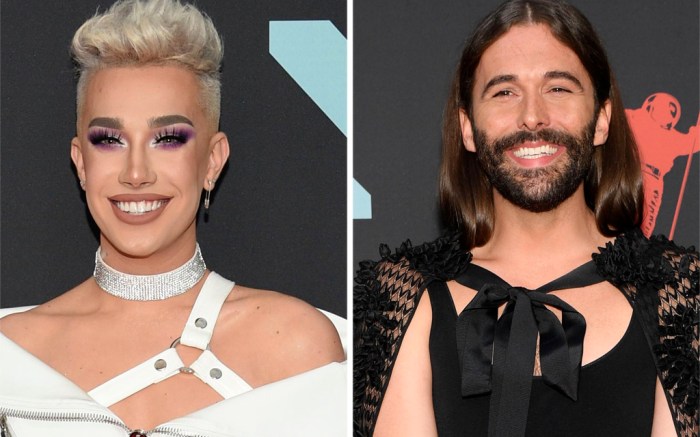 Gender neutral outfits were trending tonight on the red carpet at the MTV Video Music Awards in Newark, N.J.

Among the stars to go for a gender non-conforming look? Lil Nas X. The “Old Town Road” rapper sported a sparkly silver suit that looked like something Liberace — the famed pianist known for his flamboyant, campy looks — would have worn. Liberace embraced traditionally female designs, like sequins, crystal embellishments, lace and more details.

The singer added some country flair to his look with his footwear: a pair of silver Western boots with a pointed silhouette on a chunky heel.

Like Lil Nas X, Todrick Hall opted for a shiny silver outfit. The YouTuber wore an astronaut-inspired jumpsuit with white Buffalo London shoes. His hair — a pink ponytail — added another twist from the women’s camp.

Elsewhere, YouTuber James Charles wore hot pants with an off-the-shoulder white jacket that had bondage-inspired details. The beauty guru accessorized the look with asymmetrical white boots and a sparkly choker.

Jonathan Van Ness of “Queer Eye” fame opted for satinlike black pumps with a rounded silhouette. The star, who identifies as gender non-binary, is known for a love of heels and often sports them on the reality show. JVN teamed the shoes with an all-black look: a lacy cape and a bodysuit.

Trevor Moran opted for black pumps, too, with a pointed toe and shiny finish. The “X-Factor” alum teamed the heels with a printed minidress.

“Love & Hip Hop: Miami” star Bobby Lytes channeled the late singer Prince on the red carpet, choosing a yellow laser-cut jumpsuit, complete with a cheeky detail — cutouts around the buttocks. The look was finished off with sparkling silver boots.

Musician Prince Derek Doll arrived in a bodysuit with sheer panels and a feathered coat. Completing things was a pair of embossed black booties with buckle closures.

Flip through the gallery for more celebrity style at the 2019 MTV VMAs.