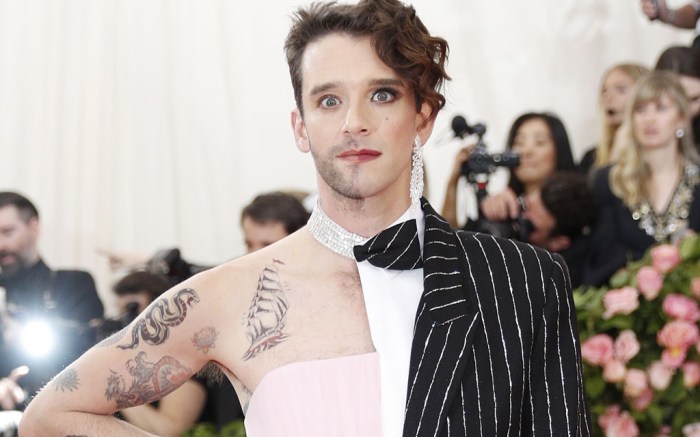 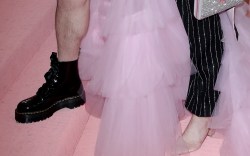 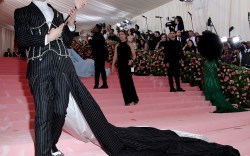 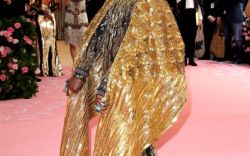 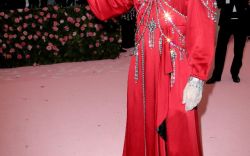 Gender fluidity was trending among men tonight on the red carpet at the 2019 Met Gala in New York.

Former “Ugly Betty” actor Michael Urie took gender non-comforming style to heightened levels thanks to Christian Siriano, who created a split-gender outfit consisting of a pinstripe black suit on one side and a pink tulle gown on the other. For footwear, Urie had on a boot by Doc Martens on one foot and a satin pink block-heeled pump on the other foot.

Elsewhere, Ezra Miller went for a daring look in a pinstriped Burberry suit with a dramatic cape and corseted waist. His shoes were black and white wingtips with embellishment on the toes. The “Perks of Being a Wallflower” actor took his look to the next level with his makeup — which included eyes painted on his face.

Perhaps the most dramatic gender nonconforming look came courtesy of Billy Porter, who famously wore a gown to the 2019 Oscars. His look, which included dramatic gold wings and a sparkly catsuit, was designed by The Blonds. His heeled Chelsea boots by Giuseppe Zanotti also sparkled in gold.

Styles, who wore Gucci, turned heads in a see-through black top with high-waisted pants. For footwear, the “Sign of the Times” singer went with heeled black boots that had an almond-shaped toe. He accessorized with a pearl earring.

Leto, who was also in Gucci, commanded attention in a bright red, embellished dress with silver shoes underneath. The Thirty Seconds to Mars frontman accessorized with a life-sized replica of his own head, long hair and all.

Styles is one of this year’s Met Gala hosts, alongside “Alejandro” hitmaker Lady Gaga, Gucci creative director Alessandro Michele and 23-time Grand Slam tennis champion Serena Williams. The theme is “Camp: Notes on Fashion” — a play on a Susan Sontag essay from the ’60s.

Click through the gallery to see more men in gender-fluid style at the 2019 Met Gala.